Items related to Ninety-Two Poems and Hymns of Yehuda Halevi 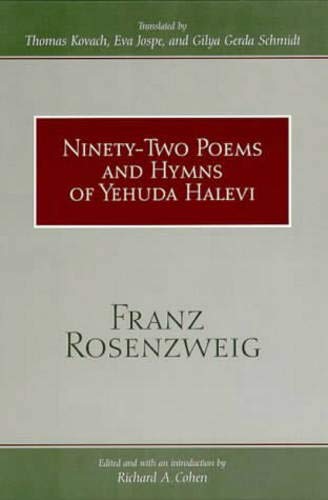 Through translation and commentary, this book presents the final visionary statements of the German-Jewish philosopher Franz Rosenzweig.

This is the first publication in English of Franz Rosenzweig’s 1927 translation of and commentaries on ninety-two poems and hymns of the greatest medieval “singer of Zion,” Yehuda Halevi (born circa 1080). Franz Rosenzweig (1886-1929) is widely recognized as one of the greatest Jewish philosophers of the modern period and his Star of Redemption is considered one of the most important twentieth-century contributions to Jewish―and Christian―theology.

Rosenzweig’s original and brilliant commentaries open a window into the final developments of his own thought: his debates with Protestant theology, his reservations regarding modern science and culture, and his progressive appreciation for the wisdom of the Jewish tradition. They are a testament not only to the profound vision of Judaism embedded in the poetry of Yehuda Halevi, but to the ever vibrant and deepening sagacity of Franz Rosenzweig himself.

Richard A. Cohen, Isaac Swift Distinguished Professor of Judaic Studies, University of North Carolina at Charlotte, is editor of Face to Face with Levinas, also published by SUNY Press, author of Elevations: The Height of the Good in Rosenzweig and Levinas and translator of four books by Emmanuel Levinas: Ethics and Infinity, Time and the Other, Discovering Existence with Husserl, and New Talmudic Readings.