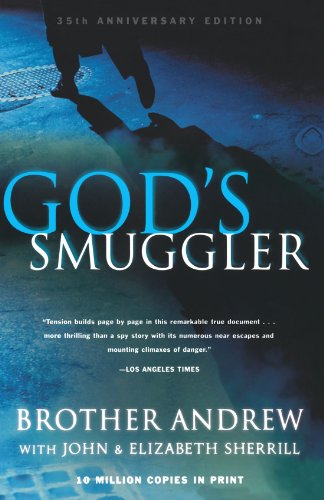 A true-life thriller that will leave you breathless!

As a boy, Brother Andrew dreamed of being an undercover spy working behind enemy lines. As a man he found himself working undercover for God. His was a mission filled with danger, financed by faith, supported by miracles.

Told it was impossible to minister behind the Iron Curtain, Andrew knew that nothing was too hard for God. Crossing "closed" borders, he prayed, "Lord, in my luggage I have Scripture I want to take to Your children. When You were on earth, You made blind eyes see. Now, I pray, make seeing eyes blind. Do not let the guards see those things You do not want them to see." And they never did.

For thirty-five years, Brother Andrew's life story has inspired millions to step out on their own journeys of faith. This young Dutch factory worker's near-incredible adventures testify of God's step-by-step guidance and hour-by-hour provision--available to all who follow His call.

Far from being over, Brother Andrew's current adventures are his most challenging yet. In a new prologue and epilogue, his story is carried into the new millennium with an account of Andrew's work in the "closed" societies of Islam.

Brother Andrew began his work in 1955 as a one-man mission-visiting, teaching, and taking Bibles to Christians behind the Iron Curtain. That work has since developed into Open Doors International, a nondenominational organization with bases around the world. When not traveling, Brother Andrew makes his home in the Netherlands.

Simon Vance gives an authenticity to Brother Andrew's true-life account of "working undercover for God" as he delivered thousands of Bibles to Communist countries in 1955, and beyond. Vance presents Andrew's heartfelt prayer at border crossings with a tone of genuine anxiety: "Do not let the guards see those things You do not want them to see." Vance's soft voice and English accent capture the humble young Dutch worker's journey of faith, which depicts God's miraculous guidance. Vance captures the tension of Andrew's life and spiritual journey with careful pacing, subtle accents, and vocal manipulation as he recounts the danger that people of faith faced in Communist countries. This inspiring true story illustrates hard-won faith and the supernatural power of God. G.D.W. © AudioFile 2009, Portland, Maine