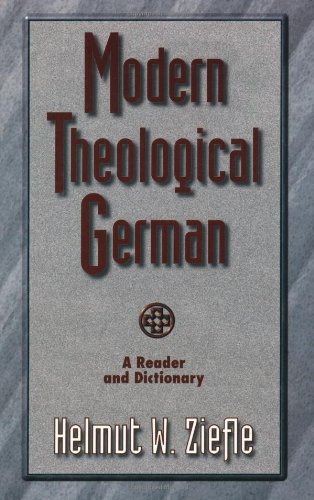 Contains selections from the German Bible and theologians such as Luther, Barth, Thielicke, and Riesner. The dictionary defines over 20,000 terms.

Helmut Ziefle's Modern Theological German equips students with a unique tool for learning theological German. This hand reference combines a revised edition of the author's accessible German reader with his Dictionary of Modern Theological German. The revised reader contains several new selections and is divided into two parts. The first part offers readings from the German Bible, enabling students to gain confidence by beginning with familiar texts. The second part presents more difficult readings drawn from the writings of several German theologians, including Martin Luther, Albert Schweitzer, Karl Barth, Helmut Thielicke, Adolf Schlatter, and Rainer Riesner. The dictionary, previously published as a separate volume, contains over 20,000 terms. Many of these terms are part of the specialized theological vocabulary not generally found, or given but slight treatment, in standard German dictionaries.

Helmut W. Ziefle (Ph.D., University of Illinois) is professor of German at Wheaton College, where he has taught since 1967. He has written several books, most of which are in German, his native language.

Book Description Baker Publishing Group, United States, 1997. Paperback. Condition: New. Revised. Language: English. Brand new Book. A revised edition of the author's popular German reader is now combined with his dictionary of theological German into one handy volume. This work provides a useful introduction for seminary and graduate students who desire a reading knowledge of the German theological vocabulary. This revised reader contains several new readings and is divided into two sections. The first is comprised of a number of selections taken from the German Bible, intended to assist the student by beginning with familiar texts. The second section moves on to more difficult selections drawn from the writings of a number of German theologians, including Martin Luther, Albert Schweitzer, Karl Barth, Helmut Thielicke, and Rainer Riesner. The dictionary, previously published as a separate volume, contains over 20,000 terms. Because of the specialized nature of the theological task and its vocabulary, many of the terms found in Ziefle's dictionary are not generally found, or are given but slight treatment, in traditional German dictionaries.Ziefle's work has long been the best resource of its kind, and now in its revised and combined form, it will prove to be even more useful to theological students who seek access to the wealth of material available only in German. Seller Inventory # AA79780801021442