Items related to Rubinstein: A Life 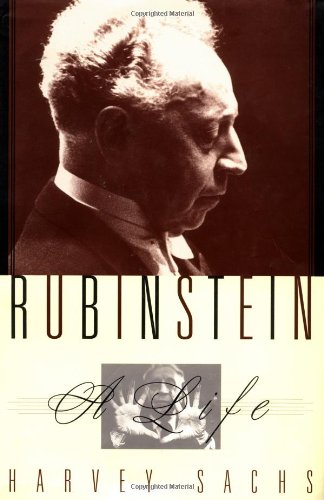 Illustrated with rare photographs, a biography by the author of Toscanini reveals Arthur Rubenstein's private life, including his love affairs, his rivalry with Vladimir Horowitz, and his relationships with the rich and powerful. 20,000 first printing.

For decades people who were fortunate enough to see and hear esteemed pianist Artur Rubinstein (1887-1982) perform left concert halls spellbound. Rubinstein went for the soul of the audience as he wrapped his soaring and spirited playing around each listener. His magnificent interpretation of Chopin remains without equal. Biographer and music historian Sachs (Toscanini, LJ 11/1/78; Music in Fascist Italy, Norton, 1988. o.p.) first heard Rubinstein play in 1959, but it was not until 1986 that he seriously considered writing a biography of Rubinstein. Not having primary source material from the musician's first 53 years was an obstacle (Rubenstein's papers were destroyed or lost when the Germans occupied his house during the war), but Sachs had the full cooperation of Rubinstein's wife, Nela, and access to a huge amount of source material that had accumulated after the Rubinsteins came to the United States. Since in his memoirs (My Young Years, LJ 2/15/73. o.p., and My Many Years, LJ 1/15/80. o.p.) Rubinstein occasionally changed some dates and facts, Sachs realized an added necessity of thoroughness in his research. The resultant biography is definitive and belongs on the shelf alongside those memoirs. Recommended for music collections in both public and academic libraries.
Kathleen Sparkman, Baylor Univ., Waco, Tex.
Copyright 1995 Reed Business Information, Inc.

Pianist Arthur Rubinstein (1887-1982), apart from being a world-renowned performer for more than 65 years, also wrote a bestselling autobiography, My Young Years. Sachs, author of an admired study of Toscanini, is therefore up against formidable competition?and comes out of it with great credit. His study is detailed, fair-minded and vivid. Rubinstein was vastly egocentric in his private life, yet appeared genuinely transformed by his music-making, which seemed often to come across better on recordings than in person and helped make him the bestselling classical pianist ever. A tireless womanizer, he was middle-aged before he married a woman 22 years his junior and had children. In the last decade of his life, he began a liaison with a young English concert promoter, Annabelle Whitestone (now married to British publisher Sir George Weidenfeld). Rubinstein seems never to have overcome his sad childhood, but the pleasure he gave and continues to give to millions was his true legacy. The book includes an outstanding review, by the author, of Rubinstein's recordings and a fine discography by Donald Manildi. Photos not seen by PW.
Copyright 1995 Reed Business Information, Inc.