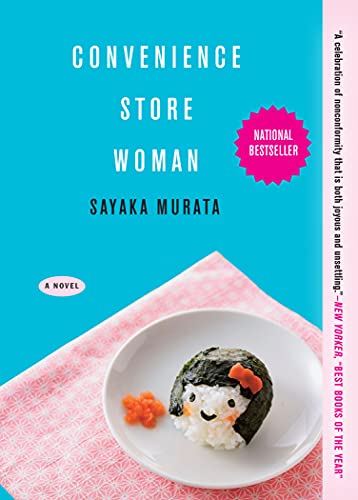 Winner of Japan’s prestigious Akutagawa Prize, Convenience Store Woman is the incomparable story of Keiko Furukura, a thirty-six-year-old Tokyo resident who has been working at the Hiiromachi “Smile Mart” for the past eighteen years. Keiko has never fit in, neither in her family, nor in school, but in her convenience store, she is able to find peace and purpose with rules clearly delineated clearly by the store’s manual, and copying her colleagues’ dress, mannerisms, and speech. She plays the part of a “normal person” excellently―more or less. Keiko is very happy, but those close to her pressure her to find a husband and a proper career, prompting her to take desperate action.

A sharp-eyed look at contemporary work culture and the pressures we all feel to conform, Convenience Store Woman offers a brilliant depiction of a world hidden from view and a charming and fresh portrait of an unforgettable heroine.

Sayaka Murata is the author of many books, including Convenience Store Woman, winner of Japan’s most prestigious literary award, the Akutagawa Prize. She used to work part-time in a convenience store, which inspired this novel. Murata has been named a Freeman’s “Future of New Writing” author, and her work has appeared in Granta and elsewhere. In 2016, Vogue Japan selected her as a Woman of the Year.

Ginny Tapley Takemori has translated works by more than a dozen Japanese writers, including Ryū Murakami. She lives at the foot of a mountain in Eastern Japan.

My present self is formed almost completely of the people around me. I am currently made up of 30 percent Mrs. Izumi, 30 percent Sugawara, 20 percent the manager, and the rest absorbed from past colleagues such as Sasaki, who left six months ago, and Okasaki, who was our supervisor until a year ago.

My speech is especially inflected by everyone around me and is currently a mix of that of Mrs. Izumi and Sugawara. I think the same goes for most people. When some of Sugawara’s band members came into the store recently they all dressed and spoke just like her. After Mrs. Izumi came, Sasaki started sounding just like her when she said, “Good job, see you tomorrow!” Once a woman who had gotten on well with Mrs. Izumi at her previous store came to help out, and she dressed so much like Mrs. Izumi I almost mistook the two. And I probably infect others with the way I speak too. Infecting each other like this is how we maintain ourselves as human is what I think.

Outside work Mrs. Izumi is rather flashy, but she dresses the way normal women in their thirties do, so I take cues from the brand of shoes she wears and the label of the coats in her locker. Once she left her makeup bag lying around in the back room and I took a peek inside and made a note of the cosmetics she uses. People would notice if I copied her exactly, though, so what I do is read blogs by people who wear the same clothes she does and go for the other brands of clothes and kinds of shawls they talk about buying. Mrs. Izumi’s clothes, accessories, and hairstyles always strike me as the model of what a woman in her thirties should be wearing.

As we were chatting in the back room, her gaze suddenly fell on the ballet flats I was wearing. “Oh, those shoes are from that shop in Omotesando, aren’t they? I like that place too. I have some boots from there.” In the back room she speaks in a languid drawl, the end of her words slightly drawn out. I bought these flats after checking the brand name of the shoes she wears for work while she was in the toilet.