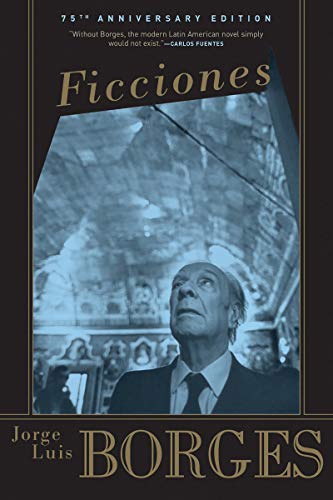 The seventeen pieces in Ficciones demonstrate the whirlwind of Borges’s genius and mirror the precision and potency of his intellect and inventiveness, his piercing irony, his skepticism, and his obsession with fantasy. Borges sends us on a journey into a compelling, bizarre, and profoundly resonant realm; we enter the fearful sphere of Pascal’s abyss, the surreal and literal labyrinth of books, and the iconography of eternal return. To enter the worlds in Ficciones is to enter the mind of Jorge Luis Borges, wherein lies Heaven, Hell, and everything in between.

Review:
Reading Jorge Luis Borges is an experience akin to having the top of one's head removed for repairs. First comes the unfamiliar breeze tickling your cerebral cortex; then disorientation, even mild discomfort; and finally, the sense that the world has been irrevocably altered--and in this case, rendered infinitely more complex. First published in 1945, his Ficciones compressed several centuries' worth of philosophy and poetry into 17 tiny, unclassifiable pieces of prose. He offered up diabolical tigers, imaginary encyclopedias, ontological detective stories, and scholarly commentaries on nonexistent books, and in the process exploded all previous notions of genre. Would any of David Foster Wallace's famous footnotes be possible without Borges? Or, for that matter, the syntactical games of Perec, the metafictional pastiche of Calvino? For good or for ill, the blind Argentinian paved the way for a generation's worth of postmodern monkey business--and fiction will never be simply "fiction" again.

Its enormous influence on writers aside, Ficciones has also--perhaps more importantly--changed the way that we read. Borges's Pierre Menard, for instance, undertakes the most audacious project imaginable: to create not a contemporary version of Cervantes's most famous work but the Quixote itself, word for word. This second text is "verbally identical" to the original, yet, because of its new associations, "infinitely richer"; every time we read, he suggests, we are in effect creating an entirely new text, simply by viewing it through the distorting lens of history. "A book is not an isolated being: it is a relationship, an axis of innumerable relationships," Borges once wrote in an essay about George Bernard Shaw. "All men who repeat one line of Shakespeare are William Shakespeare," he tells us in "Tlön, Uqbar, Orbis Tertius." In this spirit, Borges is not above impersonating, even quoting, himself.

It is hard, exactly, to say what all of this means, at least in any of the usual ways. Borges wrote not with an ideological agenda, but with a kind of radical philosophical playfulness. Labyrinths, libraries, lotteries, doubles, dreams, mirrors, heresiarchs: these are the tokens with which he plays his ontological games. In the end, ideas themselves are less important to him than their aesthetic and imaginative possibilities. Like the idealist philosophers of Tlön, Borges does not "seek for the truth or even for verisimilitude, but rather for the astounding"; for him as for them, "metaphysics is a branch of fantastic literature." --Mary Park

From the Inside Flap:
Introduction by John Sturrock; Translation by Anthony Kerrigan, et al.