Items related to Black on White: Black Writers on What It Means to Be...

Roediger, David R. Black on White: Black Writers on What It Means to Be White 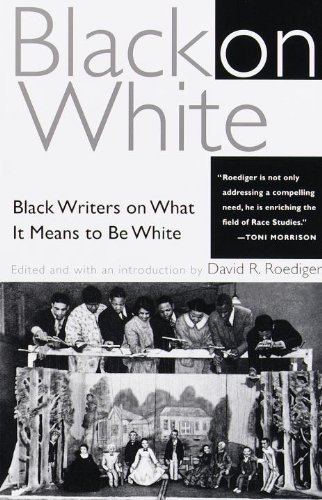 In this thought-provoking volume, David R. Roediger has brought together some of the most important black writers throughout history to explore the question: What does it really mean to be white in America?

From folktales and slave narratives to contemporary essays, poetry, and fiction, black writers have long been among America's keenest students of white consciousness and white behavior, but until now much of this writing has been ignored.  Black on White reverses this trend by presenting the work of more than fifty major figures, including James Baldwin, Derrick Bell, Ralph Ellison, W.E.B. Du Bois, bell hooks, Toni Morrison, and Alice Walker to take a closer look at the many meanings of whiteness in our society.

Rich in irony, artistry, passion, and common sense, these reflections on what Langston Hughes called "the ways of white folks" illustrate how whiteness as a racial identity derives its meaning not as a biological category but as a social construct designed to uphold racial inequality. Powerful and compelling, Black on White provides a much-needed perspective that is sure to have a major impact on the study of race and race relations in America.

American literature boasts a long history of white authors writing about blacks. From Harriet Beecher Stowe's abolitionist novel, Uncle Tom's Cabin, to Richard Herrnstein and Charles Murray's controversial study of ethnicity and intelligence, The Bell Curve, the right of white writers to examine the lives of black people is accepted without comment. But where are the commentaries by black writers on white culture? They exist, to be sure--Frederick Douglass, W.E.B. Du Bois, and Zora Neale Hurston, to name just a few, have all written on the subject of "white folk"--but little if any of this work ever makes it into the consciousness of mainstream America. This new anthology might just change all that.

Edited by David R. Roediger, Black on White brings together some of the most succinct writing ever on what it means to be white--from the African American point of view. Consider, for example, William J. Wilson's satiric "What Shall We Do with the White People?":

For many centuries now have they been on this continent; and for many years have they had entire rule and sway; yet they are today no nearer the solution of the problem, "are they fit for self-government"--than they were at the commencement of their career.

Or bell hooks's critical "Representations of Whiteness in the Black Imagination":

Toni Morrison, Amiri Baraka, Langston Hughes, Ralph Ellison, and Alice Walker are just a few of the heavy-hitters included in an anthology that runs the gamut of African American writers and thinkers. --Alix Wilber From the Back Cover:

"Although long dismissed as irrelevant or biased, African American views on whiteness are in fact crucial to any intelligent discussion on race. By documenting the history of these views, David Roediger is not only addressing a compelling need, he is enriching the field of Race Studies."
--Toni Morrison

"Black on White is a brilliantly disturbing collection of work by black authors who are the often unappreciated foreparents of contemporary debates about the fallacies and functions of whiteness."
--Michael Eric Dysonauthor of Race Rules

"This valuable collection provides a new and badly needed perspective on America's deep-seated problems of racial inequality and antagonism. . . . This is the first effort to present a range of black opinion on the meaning of whiteness, and it is a notably successful one."
--George M. Fredrickson, Edgar E. Robinson Professor of United States History, Stanford University

"Brilliant, wide-ranging, and beautifully executed, Black on White puts to rest any claims that 'whiteness' is a passing fad meant to put white folks at the center again."
--Robin D. G. Kelley, author of Yo Mama's Dysfunktional: Fighting the Culture Wars in Urban America