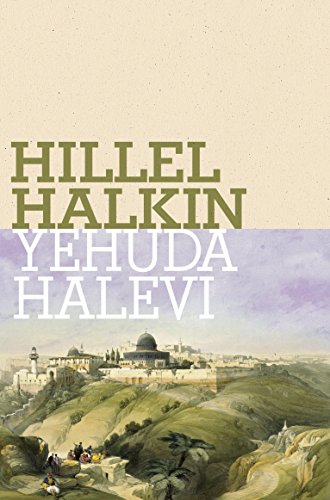 Part of the Jewish Encounter series

A masterly biography of Yehuda Halevi, one of the greatest of Hebrew poets and a shining example of the synthesis of religion and culture that defined the golden age of medieval Spanish Jewry.

Like Maimonides, with whom he contrasts sharply, Yehuda Halevi spanned multiple worlds. Poet, philosopher, and physician, he is known today for both his religious and secular verse, including his famed “songs of Zion,” and for The Kuzari, an elucidation of Judaism in dialogue form. Hillel Halkin brilliantly evokes the fascinating world of eleventh- and twelfth-century Andalusian Spain in which Halevi lived and discusses the influences that formed him. Relying on the astonishing discoveries of the Cairo Geniza, he pieces together the mystery of Halevi’s last days, with its fateful voyage to Palestine, which became a haunting legend.

An acclaimed writer and translator, Halkin builds his account of Halevi’s life and death on his magnificent translations of Halevi’s poems. He places The Kuzari within the wider context of Jewish thought and explains why, more perhaps than any other medieval Jewish figure, Halevi has become an inspirational yet highly controversial figure in modern Jewish and Israeli intellectual life.

HILLEL HALKIN’s work includes Letters to an American Jewish Friend; Across the Sabbath River: In Search of a Lost Tribe of Israel; A Strange Death; Grand Things to Write a Poem On: A Verse Autobiography of Shmuel Hanagid; and dozens of translations from Hebrew and Yiddish by major contemporary and classical authors. His political, cultural, and literary essays have appeared often in Commentary and The New Republic, and he has been a weekly columnist for The Jerusalem Post and The New York Sun. He lives in Israel.

It happened in Andalusia, in the Muslim-ruled south of Spain. We can’t say exactly where. It could have been in Córdoba, or in Granada, or in Seville, or in any of the other towns that the young man passed through and lived in after leaving the Christian north as an adolescent. We can’t say exactly when it happened, either. Since the young man was born sometime between 1070 and 1075, we know only that it was toward the end of the eleventh century. This was a time— a thousand years after the destruction of the Second Temple, eight hundred years after the redaction of the Mishnah, and five hundred years after the compilation of the Babylonian Talmud—in which 90 percent of the world’s Jews lived in a Muslim expanse that stretched from the Atlantic coasts of Spain and Morocco to the Indian subcontinent, and from Yemen to the Aral Sea. Andalusia was in the far northwestern corner of this vast territory, pressing against and pressed back on by Christian Europe. It had been a part of the Islamic realm ever since Arab and Berber warriors from North Africa stormed the Straits of Gibraltar in 711 and conquered most of Spain.

If the night was warm and rainless, as most Andalusian nights are, the young man was probably sitting at a table out-of-doors, in an interior courtyard of the sort still found everywhere in the south of Spain. (What tourist to the region has not seen, on a street of seemingly plain houses, a door swing open and shut on a gardened patio like the tantalizing flash of a secret existence?) Perhaps, if it was springtime, a blossoming orange or lemon tree gave off its sweet-and-sour scent. The young man was unlikely to have been drinking alone, since he was too popular to be left by himself for long. From a neighboring table, an admirer sent a jug of wine. The young man thanked him with a poem. It may have been written afterwards and delivered by a messenger. Yet judging by the young man’s gifts and the art of poetic improvisation in Muslim Spain, it was most probably composed on the spot and carried back by the waiter who had brought the wine. It went, in a free English translation:

I shall sing your praise all my days

For the nectar you sent for my lips.

Brother Jug joins in my lays,

And from him I won’t cease my sips

Even though all my friends say, “Come, come!

How much longer will you play the rake?”

And shan’t drink to cure every ache?”

I’m too young to put down the cup

I’ve only begun to pick up. To and for

What end should I stop

When my years are not yet two and four?

In Hebrew, the language in which this poem was written, the young man’s punning avowal that he was under twenty-four (which need not mean he was twenty-three; he could just as well have been sixteen or seventeen) works differently from my English rendition. Traditionally, each of the Hebrew consonants has a numerical value, and the word kad, “jug,” is composed of the letters kaf, which stands for twenty, and dalet, which stands for four. Literally, then, the poem’s last two lines read:

And how can I give up the kad [jug]

When my years have not yet reached kad [twentyfour]?

Its pun aside, the young man’s poem obeyed complex rules, since not only was the Hebrew verse of his day required to have meter and rhyme, its standards for both were more stringent than those of formal English poetry. Regardless of its length, a poem in the classical style was allowed only a single mono-rhyme, with which each of its lines had to end. When it came to meter, on the other hand, a poet had to choose among a dozen possible patterns, each consisting of a rigidly adhered-to alteration of “long” and “short” syllables. For this particular poem, the young man chose the meter, known as the marnin or “allegro,” short-long-long-long, short-long-long-long, short-long-long, a single sequence of which made up the half-lines or hemistiches into which each of the poem’s full lines was divided.

Dashing off, amid the hubbub of a tavern, a poem so demanding yet wittily accomplished would have been an impressive feat. It would not have ranked, however, as a singular one. Talented poets in Andalusia were expected to do such things. It is told of Shmuel Hanagid (993–1056), the first of the great Hispano-Hebrew poets, that he once had quoted to him a couplet on the subject of biting into an apple. Not to be outdone, he proceeded to compose, one after another, fifteen short but perfectly constructed poems on the same theme before running out of time, breath, or inspiration.

Indeed, if calling an age “poetic” refers, not to some supposed collective sublimity or imaginativeness of mind, but, more mundanely, to the widespread use of poetry in ordinary life as a medium of communication and social exchange, the young man was born in one of the most historically poetic of ages. When, for instance, the same Shmuel Hanagid decided one spring day in Granada to throw a party for his friends, the invitations he sent out were in the form of a poem telling them to “Take note, make haste, and do not fail"/"To gather in my garden.” But this would have been only the beginning. Hanagid’s invitees might have informed him of their acceptance by sending him a poem in return; some might have turned up at his door with poems as gifts; if there were toasts or speeches, these would have been in poetic form, too; any party games played would have included competitions in which the guests were asked to write a poem on the same theme or having the same formal properties; and a good time having been had, poems would be sent as thank-you notes. It was a world in which, in cultivated circles, no solemn occasion, birth, wedding, or death went without a poem to commemorate it; in which friends wrote each other letters in poetry or, if they were in a hurry, in a more easily composed rhymed prose; in which the ability to pen a creditable poem was considered as indispensable a part of an education as filling out a job application is in our own age. A poet who was more than merely creditable was a sought-after figure, often supported by wealthy patrons for whom he wrote verse to order.

In the Arabic-speaking Jewish society in which our young man lived, the language of these poems was always Hebrew. Yet the central role accorded to poetry did not stem originally from a Jewish impulse. Its history went back to the preliterate life of the Arabian desert, whose Bedouin tribes had poured out of it following the founding of Islam in the early seventh century and rapidly overrun much of the world under the new religion’s martial banner. Among these desert nomads, the ability to extemporize verse had always been valued greatly. Poems were an everyday vehicle for the expression of emotion; for the sending of messages and requests; for the carrying of news from one encampment to another; for the recording and remembering of unusual events; for the wooing of the opposite sex; for the enhancement of celebrations; for the flattering of authority; for the vaunting of one’s exploits; for the praising of one’s friends and the derogation of one’s enemies, and the like. The popular poetry tournaments held at the commercial fairs of pre-Islamic times testified to the regard in which gifted poetic improvisers were held—and when, at moments of high drama or strong feeling, characters in medieval Arabic prose narratives like One Thousand and One Nights break into poetic speech, they are harking back to the traditions of the desert.

The cosmopolitan culture of the great Islamic cities of the East, such as Baghdad, Damascus, and Cairo, with their class of professional poets supported by the patronage of royalty and wealth, was far removed from Bedouin life. Yet the special place of poetry persisted in Arab society and spread from the East to Andalusia. The annals of Muslim Spain are replete with stories that illustrate how readily men and women were moved to, and swayed by, poetic diction. The eleventh-century poet-king of Seville, Ala’llahi AlMu’tamid, we are told, owed his marriage to this propensity. Once, as a young prince, he was sailing on the Guadalquivir River with a friend when, struck by the ripples on it, he spontaneously exclaimed, Sana’a ‘r-rihu min el-mai zarad, “The wind has spun a coat-of-mail from the water,” and challenged his companion to add a second line. Some slave girls were doing their laundry on the riverbank, and while the friend racked his brain, one of them, a stunning beauty who had overheard the prince’s challenge, called back across the water, Eyyu dir’in li-qitalin low qamad, “What armor for battle if it stiffened!” Al-Mu’tamid was so taken by her cleverness and looks that he bought her from her master and married her. She was to be the love of his life.

Jewish Andalusia was not an exact replica of its Muslim surroundings. But while Jews in the Muslim world lived, on the whole, within a social framework of their own, they were more heavily influenced by their host culture than any previous rabbinically regulated Jewish society in the Diaspora. This was why Hebrew poetry, which was modeled on its Arabic counterpart in form and content, was so important to them, and why our young man had left home in his teens to seek his literary fortune in Spain’s south, where the art of poetry was more advanced.