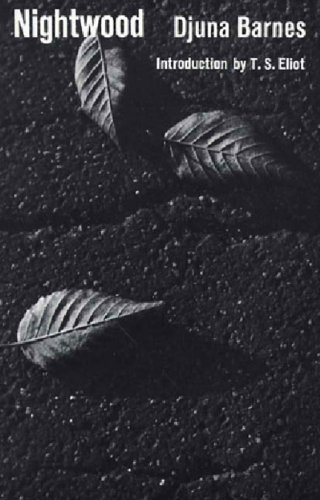 The impassioned monologues of Doctor Dante O'Connor reveal the story of Robin Vote, a young American woman in interwar Paris, whose fate is the destruction of all who love her

Review:
Nightwood is not only a classic of lesbian literature, but was also acknowledged by no less than T. S. Eliot as one of the great novels of the 20th century. Eliot admired Djuna Barnes' rich, evocative language. Lesbian readers will admire the exquisite craftsmanship and Barnes' penetrating insights into obsessive passion. Barnes told a friend that Nightwood was written with her own blood "while it was still running." That flowing wound was the breakup of an eight-year relationship with the lesbian love of her life.
From the Inside Flap:
Admired by T. S. Eliot, Ezra Pound, Graham Greene, and Dylan Thomas, Djuna Barnes was the most influential and prolific female writer in Paris during the 1920s and 1930s. The Modern Library is proud to include--for the first time--her most critically acclaimed novel, Nightwood, which was praised by The Washington Post Book World as "a masterpiece of modernism." Dorothy Allison, author of the National Book Award-nominated novel Bastard Out of Carolina, has written an Introduction especially for this edition, in which she defends Nightwood as a lesbian classic.

First published in the United States in 1937, Nightwood is a novel of bold imagining and passionate, lyrical prose. Described by the author as the soliloquy of "a soul talking to itself in the heart of the night," the novel creates a dreamlike world in which time ceases to exist and in which human beings transform into animals. At Nightwood's center are the love affairs of Robin Vote--a character based on Barnes's lover, Thelma Wood. Robin marries Felix Volkbein, an eccentric aristocrat, whom she meets in Paris, and whom she abandons years later for the American Nora Flood. But Nora cannot contain Robin, either, and Robin in turn deserts her for the larcenous Jenny Petherbridge. Rich in irony and symbolism, Nightwood brilliantly depicts the all-consuming power of erotic obsession in language that twists and turns, drawing the reader into a labyrinth of meaning and revelation. This edition also includes T. S. Eliot's Introduction to the 1937 American edition.

Elizabeth Hardwick wrote, "Djuna Barnes is a writer of wild and original gifts. . . .To her name there is always to be attached the splendor of Nightwood, a lasting achievement of her great gifts and eccentricities---her passionate prose and, in this case, a genuineness of human passions."