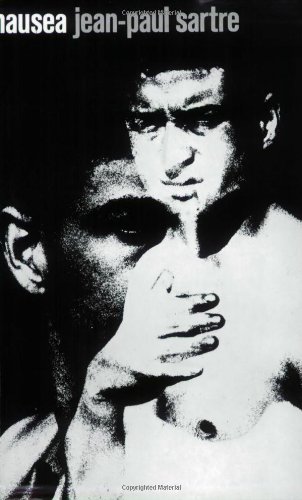 Winner of the 1964 Nobel Prize in Literature. Jean-Paul Sartre, philosopher, critic, novelist and dramatist, hold a position of singular eminence in the world of French letters. Among readers and critics familiar with the whole of Sartre's work, it is generally recognized that his earliest novel, Le Nausée (first published in 1938), is his finest and most significant. It is unquestionably a key novel of the Twentieth Century and a landmark in Existentialist fiction.

Nausea is the story of Antoine Roquentin, a French writer who is horrified at his own existence. In impressionistic, diary form he ruthlessly catalogues his every feeling and sensation about the world and people around him. His thoughts culminate in a pervasive, overpowering feeling of nausea which "spread at the bottom of the viscous puddle, at the bottom of our time—the time of purple suspenders and broken chair seats; it is made of wide, soft instants, spreading at the edge, like an oil stain." Roquentin's efforts to come to terms with his life, his philosophical and psychological struggles, give Sartre the opportunity to dramatize trhe tents of his Existentialist creed.

he introduction for this edition of Nausea by Hayden Carruth gives background on Sartre's life and major works, a summary of the principal themes of Existentialist philosophy, and a critical analysis of the novel itself.

Philosopher, novelist, playwright and polemicist, Jean-Paul Sartre is thought to have been the central figure in post-war European culture and political thinking. His most well-known works include THE AGE OF REASON, NAUSEA and IRON IN THE SOUL.

Shipping: US$ 30.23
From United Kingdom to U.S.A.
Destination, rates & speeds