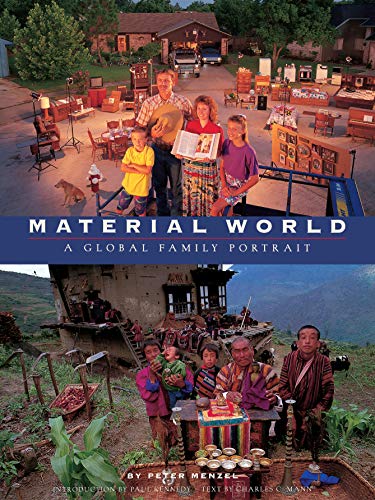 In an unprecedented effort, sixteen of the world’s foremost photographers traveled to thirty nations around the globe to live for a week with families that were statistically average for that nation. At the end of each visit, photographer and family collaborated on a remarkable portrait of the family members outside their home, surrounded by all of their possessions a few jars and jugs for some, an explosion of electronic gadgetry for others. Vividly portraying the look and feel of the human condition everywhere on Earth, this internationally acclaimed bestseller puts a human face on the issues of population, environment, social justice, and consumption as it illuminates the crucial question facing our species today: Can all six billion of us have all the things we want?

In honor of the United Nations-sponsored International Year of the Family in 1994, award-winning photojournalist Peter Menzel brought together 16 of the world's leading photographers to create a visual portrait of life in 30 nations. Material World tackles its wide subject by zooming in, allowing one household to represent an entire nation. Photographers spent one week living with a "statistically average" family in each country, learning about their work, their attitudes toward their possessions, and their hopes for the future. Then a "big picture" shot of the family was taken outside the dwelling, surrounded by all their (many or few) material goods.

The book provides sidebars offering statistics and a brief history for each country, as well as personal notes from the photographers about their experiences. But it is the "big pictures" that tell most of the story. In one, a British family pauses before a meal of tea and crumpets under a cloudy sky. In another, wary Bosnians sit beside mattresses used as sniper barricades. A Malian family composed of a husband, his two wives, and their children rests before a few cooking and washing implements in golden afternoon light. Material World is a lesson in economics and geography, reminding us of the world's inequities, but also of humanity's common threads. An engrossing, enlightening book. --Maria Dolan