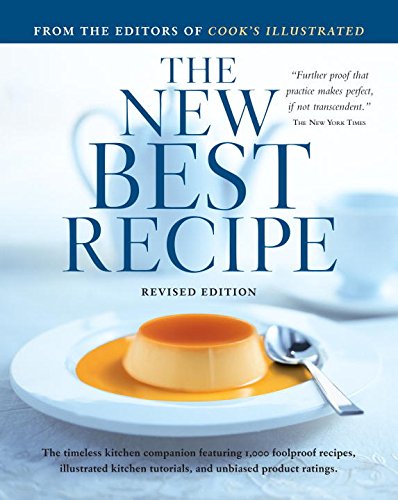 The updated version of a best-selling classic

Flagship book of award-winning series with more than 1000 pages and 800 illustrations. Would you make 38 versions of creme caramel to find the absolute best version? The editors of Cook's Illustrated did. Along with 20 versions of simple recipes such as coleslaw. Now fully revised and expanded this new edition offers more than 1000 recipes for all your favorite dishes from roast chicken and macaroni cheese to creme caramel and chocolate chip cookies. There are also expanded tutorials on grilling, baking, stir frying and much more. This is the ultimate cooking resource for novice and experienced cooks alike.

From the Inside Flap:
With The New Best Recipe, we invite you into America’s Test Kitchen, where you will stand at our elbows as we try to develop the best macaroni and cheese, the best meat loaf, the best roast chicken, the best brownie, and nearly 1,000 more best recipes for all of your favorite home-cooked foods. For the past decade, nearly two dozen test cooks and editors have worked together to develop thousands of recipes that millions of cooks have come to rely on. When the original Best Recipe was first published in 1999, this collection won accolades for its landmark approach to food and recipes. Now, with this newly revised and practical cookbook, we offer you the best of the best, an expanded collection (with 500 recipes new to this edition) assembled by the editors of Cook’s Illustrated.

Behind this book—and indeed everything we do at America’s Test Kitchen—is a shared understanding of how frustrating it can be to spend time planning, shopping, and cooking only to turn out dishes that are mediocre at best. Have you ever been frustrated by piecrust that shrinks down the sides of the pan once baked? Have you ever spent a -fortune on prime rib only to have it come out dry and tough? Or baked a cheesecake that emerged from the oven with a crack the size of the San Andreas fault? Most of us don’t have the time or inclination to spend hours and hours finding the answers to these and hundreds of other common cooking problems. We want recipes that work the first time and every time, and we want clear instructions. With The New Best Recipe in hand, you will have access to a wealth of practical information that will make you not only a better cook but a more confident one as well. No one likes to make mistakes in the kitchen. That’s why we test recipes over and over again (in some cases, more than 50 times)—so you don’t have to.

Because good technique is also critical, we have included 800 illustrations that show you the best way to do everything from carving a turkey to beating egg whites properly to frosting a layer cake to setting up your grill. And because the right equipment always makes a difference, you’ll find valuable information on how and when to splurge on that expensive knife or baking pan and when the basic model will do just fine. (In our test, for instance, the $4 Baker’s Secret loaf pan trumped competitors with prices four times as high.)

We also explain the science of cooking (for instance, how brining works to ensure juicy meat and why butter should be added before dairy for the silkiest mashed potatoes) because understanding the science of food can help anyone become a better cook. Complete with recipes ranging from appetizers to desserts, The New Best Recipe promises to be a classic and timeless kitchen companion, one that draws back the curtain on our testing process so you learn firsthand what makes even the simplest recipe the best.

Founded in 1980, Cook’s Illustrated is renowned for its near-obsessive dedication to finding the best methods of American home cooking. The editors of Cook’s Illustrated are also the authors of a best selling series of cookbooks (The Best Recipe Series) as well as a series of companion books to the America’s Test Kitchen public television show (which reaches 2.4 million viewers per episode). Filmed in America’s Test Kitchen (a 2,500-square-foot test kitchen in Brookline, Massachusetts), the show features the editors, test cooks, equipment testers, science experts, and food tasters from the magazine’s staff.