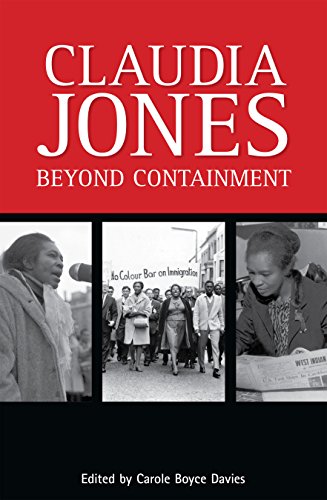 Claudia Jones, intellectual genius and staunch activist against racist and gender oppression founded two of Black Briton’s most important institutions; the first black newspaper, the West Indian Gazette and Afro-Asian Times and was a founding member of the Notting Hill Carnival. This book makes accessible and brings to wider attention the words of an often overlooked 20th century political and cultural activist who tirelessly campaigned, wrote, spoke out, organized, edited and published autobiographical writings on human rights and peace struggles related to gender, race and class. “Claudia Jones was an iconic figure who inspired a generation of black activists and deserves to be much more widely known. This important book is a fitting memorial.” Diane Abbott, MP, Westminster, London.

Carole Boyce Davies is an African Diaspora Studies scholar and professor of Africana Studies at Cornell University. She is the author of Left of Karl Marx: The Political Life of Black Communist Claudia Jones (2008). With this her second book on Claudia Jones, Davies continues the task of ensuring that Claudia Jones takes her rightful place in the exalted list of twentieth-century Caribbean intellectuals in the Diaspora, including her compatriots George Padmore and C.L.R. James, who engaged with the world to make it a more enlightened place and whose legacy still deserves to resonate.

Davies provides a glimpse of the totality of Jones as a radical black activist, intellectual, feminist, poet, organizer, and journalist.... She reveals how Jones's thoughts and practices are linked to a tradition of radical female and male activists such as Frederick Douglas, Sojourner Truth, and Harriet Tubman. --Ama Biney, University of London