Items related to Only Fools Die of Heartbreak

Only Fools Die of Heartbreak 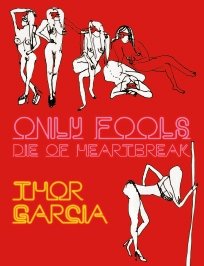 The hellraising, nightmarish genius of Thor Garcia has returned in this explosive collection of sordid, hilarious, gut-twisting tales. Meet the infamous Lenka, the mournful cripple who never met a penis she didn't want to chop. Or Cleo Blump, beaten and raped from an early age, who rises to lead the Blond Revolution. There's father Ernie, the athletic standout who never did care much for being a man. And George P., the poet and ex-boxer who finds it all floating out of his grasp. Meet Halingwhorst, the drunk, once-scorned writer, as he edges toward unimaginable triumph. And the anonymous man ruined by divorce, who runs into a dangerously un-smooth criminal on the day Michael Jackson died. Jump on and let Thor Garcia take you on a hard-drinking, hard-living drive. It's a no-holes-barred assassination of our world today. The horror, madness and humor - along with the impeccable dialogue and fast-moving prose - will leave you breathless.

1. Only Fools Die of Heartbreak