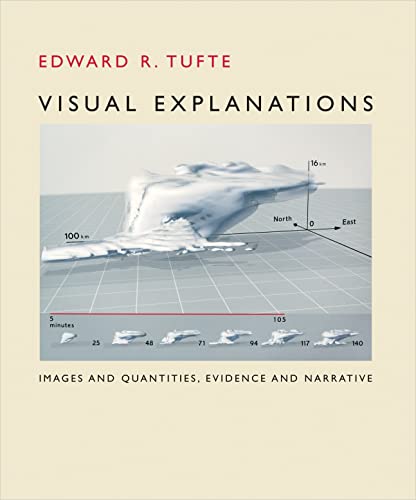 Describes design strategies - the proper arrangement in space and time of images, words, and numbers - for presenting information about motion, process, mechanism, cause, and effect. Examines the logic of depicting quantitative evidence.

With Visual Explanations, Edward R. Tufte adds a third volume to his indispensable series on information display. The first, The Visual Display of Quantitative Information, which focuses on charts and graphs that display numerical information, virtually defined the field. The second, Envisioning Information, explores similar territory but with an emphasis on maps and cartography. Visual Explanations centers on dynamic data--information that changes over time. (Tufte has described the three books as being about, respectively, "pictures of numbers, pictures of nouns, and pictures of verbs.")

Like its predecessors, Visual Explanations is both intellectually stimulating and beautiful to behold. Tufte, a self-publisher, takes extraordinary pains with design and production. The book ranges through a variety of topics, including the explosion of the space shuttle Challenger (which could have been prevented, Tufte argues, by better information display on the part of the rocket's engineers), magic tricks, a cholera epidemic in 19th-century London, and the principle of using "the smallest effective difference" to display distinctions in data. Throughout, Tufte presents ideas with crystalline clarity and illustrates them in exquisitely rendered samples.

For more than 15 years, Edward R. Tufte has been on a crusade to educate people who want to explain the world visually to others ... In his new volume, Tufte, who teaches information design at Yale, is once again full of compelling and amusing examples, intelligently collected and attractively displayed ... The printing once again is lavish and beautiful, and the book is alive with instructive visual fun... -- The New York Times Book Review, Richard J. Meislin

This third Tufte book on the display of information is not for novices: it provides pictures of verbs, cause and effect, and other dynamic patterns of information display, exploring how visual evidence influences computer interfaces, design strategies, and how information is transferred and represented. This should hold appeal beyond the arts, into the scientific and computer realms. -- Midwest Book Review

Shipping: US$ 17.90
From United Kingdom to U.S.A.
Destination, rates & speeds