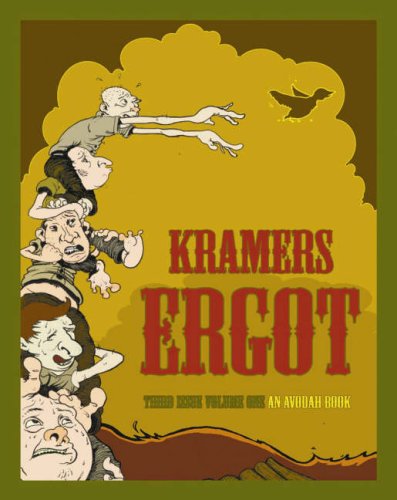 Kramers Ergot is a new comix anthology showcasing the very best new cartoonists in comics. Some of the better known contributors include Xeric winners Anders Nilsen and Hans Rickheit, award-winning animation filmmakers Kathleen Lolley & Stefan Gruber , Fort Thunder art associates Ben Jones and Joe Grillo, Neil Fitzpatrick (Neil Jam), Mat Tait (Comix 2000, SBC), and Justin Howe (Coober Skeeber). Stories range from light hearted and whimsical, to existential and psychosexual, to the surreal within the nostalgic. Cartooning styles are also quite varied but all of which are held together by an acute aesthetic sense of book design and long lastingness. Kramers Ergot is the only book of its kind: an exquisitely produced showcase for the finest young cartoonists emerging on the comix scene. Contributors also include Neil Fitzpatrick, Sara Varon, Mark Burrier, Zack Soto, Sammy Harkham and Luke Quigley. Kramers Ergot is edited by twenty-one-year-old Sammy Harkham, who felt that there was a serious dearth of books in well produced formats that presented work by new cartoonists. Many of the established anthologies that previously published unknown cartoonists side-by-side with established artists are no longer doing that anymore, or are now defunct. "Hopefully," Harkham said, "people will pick up an issue of Kramers Ergot and feel like they are getting shown what’s emerging in comics today."