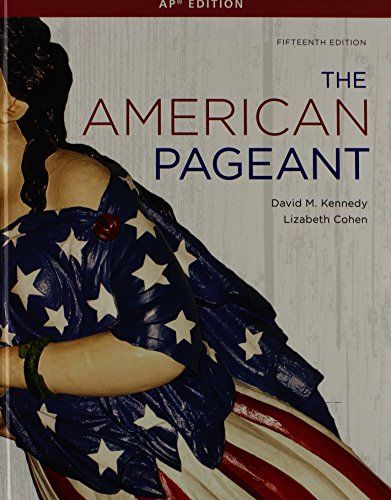 THE AMERICAN PAGEANT enjoys a reputation as one of the most popular, effective, and entertaining texts in American history. The colorful anecdotes, first-person quotations, and trademark wit bring American history to life. The Fifteenth edition includes markedly deeper explorations of the cultural innovations, artistic movements, and intellectual doctrines that have engaged and inspired Americans and shaped the course of American history. Additional features of THE AMERICAN PAGEANT help readers understand and master the content: part openers and chapter-ending chronologies provide a context for the major periods in American history, while other features present primary sources, scholarly debates, and key historical figures for analysis.

David M. Kennedy received his Ph.D. from Yale University. He is the Donald J. McLachlan Professor of History Emeritus and co-director of The Bill Lane Center for the Study of the North American West at Stanford University. His first book, BIRTH CONTROL IN AMERICA: THE CAREER OF MARGARET SANGER, was honored with both the Bancroft Prize and the John Gilmary Shea Prize. He has won numerous teaching awards at Stanford, where he teaches both undergraduate and graduate courses in American political, diplomatic, intellectual, and social history, and in American literature. Dr. Kennedy published a volume in the OXFORD HISTORY OF THE UNITED STATES, FREEDOM FROM FEAR: THE AMERICAN PEOPLE IN DEPRESSION AND WAR, 1929--1945, for which he was honored with the 2000 Pulitzer Prize. He is an elected fellow of the American Academy of Arts and Sciences and of the American Philosophical Society, and he served from 2002--2011 on the board of the Pulitzer Prizes.

Lizabeth Cohen received her Ph.D. from the University of California, Berkeley. She is the Howard Mumford Jones Professor of American Studies in the history department and the Dean of the Radcliffe Institute for Advanced Study at Harvard University. In 2007--2008 she was the Harmsworth Professor of American History at Oxford University. Previously, she taught at New York University and Carnegie Mellon University. The author of many articles and essays, Dr. Cohen was a Pulitzer Prize finalist for her first book, MAKING A NEW DEAL: INDUSTRIAL WORKERS IN CHICAGO, 1919--1939, for which she later won the Bancroft Prize and the Philip Taft Labor History Award. She authored A CONSUMERS' REPUBLIC: THE POLITICS OF MASS CONSUMPTION IN POSTWAR AMERICA (2003), and is currently writing SAVING AMERICA'S CITIES: ED LOGUE AND THE STRUGGLE TO RENEW URBAN AMERICA IN THE SUBURBAN AGE, on urban renewal in American cities after World War II. At Harvard, she has taught courses in 20th century American history, with particular attention to the intersection of social and cultural life and politics. She now oversees the Radcliffe Institute, a major center for scholarly research, creative arts, and public programs.

"[The American Pageant] has what I would call a 'macro' and 'micro' approach to history; it presents the American drama both in terms of broad, over-arching themes and through the eyes of the individuals who were the players on its stage. In short, you get to see the forest and the trees!"

"The Thinking Globally features provide students with 'rainbow' type lenses to help discover that history is always about interplay and interaction of different countries and cultures."