Items related to Loose Leaf for the Art of Public Speaking

Lucas, Stephen Loose Leaf for the Art of Public Speaking

Loose Leaf for the Art of Public Speaking 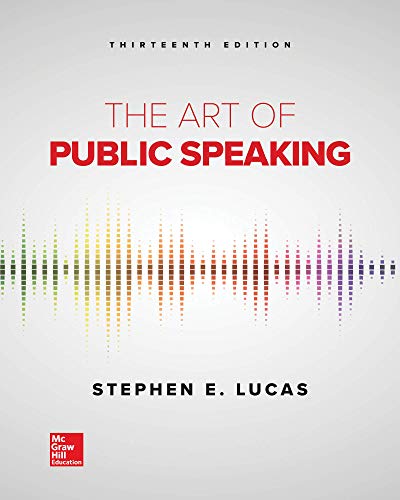 Fully updated for the thirteenth edition, the award-winning The Art of Public Speaking offers a time-tested approach that has made it the most widely used college textbook on its subject in the world.  Seamlessly coordinated with Connect, McGraw-Hill Education's pathbreaking online program, it supplies a proven set of teaching and learning tools that is without parallel among public speaking books.
For experienced instructors, The Art of Public Speaking presents a solid, fully customizable foundation and an abundance of teaching aids from which to choose, allowing for complete teaching flexibility in the course.  For novice instructors, its wisdom, steady hand, and unmatched ancillary package instill confidence and build success in the classroom from day one.

Stephen E. Lucas is Professor of Communication Arts and Evjue-Bascom Professor in the Humanities at the University of Wisconsin-Madison, where he has taught since 1972. He received his bachelor's degree from the University of California, Santa Barbara, and his master's and doctorate degrees from Penn State University.

Professor Lucas has been recognized for his work as both a scholar and a teacher. His first book, Portents of Rebellion: Rhetoric and Revolution in Philadelphia, 1765-1776, received the Golden Anniversary Award of the National Communication Association in 1977 and was nominated for a Pulitzer Prize. His major articles include "The Schism in Rhetorical Scholarship" (1981), "The Renaissance of American Public Address: Text and Context in Rhetorical Criticism" (1988), "The Stylistic Artistry of the Declaration of Independence” (1990), and “The Rhetorical Ancestry of the Declaration of Independence” (1998), for which he received the Golden Anniversary Monograph Award of the National Communication Association. His most recent book is Words of a Century: The Top 100 American Speeches, 1900-1999 (2009).

Professor Lucas has received a number of teaching awards, including the Chancellor's Award for Excellence in Teaching at the University of Wisconsin and the National Communication Association’s Donald Ecroyd Award for Outstanding Teaching in Higher Education. His lecture course on "The Rhetoric of Campaigns and Revolutions" is among the most popular on campus and has twice been selected for statewide broadcast in its entirety by Wisconsin Public Radio. Professor Lucas is featured in the Educational Video Group’s program on the history of American public address, and he has appeared on the History Channel’s documentary on the Declaration of Independence.

Professor Lucas has directed the introductory public speaking course at the University of Wisconsin-Madison since 1973. Over the years he has been responsible for numerous teaching innovations and has supervised the training of hundreds of graduate assistants. In addition to participating in public speaking workshops and colloquia at schools throughout the United States, he has served as a judge for the major national English-language public speaking competitions in China, has lectured at numerous Chinese universities, and has conducted workshops for Chinese instructors on teaching public speaking.

Stephen Lucas and his wife, Patty, live in Madison, Wisconsin, and have two sons, Jeff and Ryan. His interests include travel, sports, art, and photography.

Book Description McGraw-Hill Education, 2019. Soft cover. Condition: New. Brand New International Edition textbook. Some book may show sales disclaimer such as "Not for Sale or Restricted in US" on the cover page but it is absolutely legal to use in US or Canada. Ship from Multiple Locations, including Asia , Hong Kong ,Taiwan , US or Canada depend on stock location. Seller Inventory # 000068

2. The Art of Public Speaking:

3. Loose Leaf for the Art of Public Speaking

5. THE ART OF PUBLIC SPEAKING

Book Description McGraw-Hill Education, 2019. soft cover. Condition: New. International Edition. No supplemental materials. International Editions may have a different cover or ISBN but generally have the exact same content as the US edition, just at a more affordable price. In some cases, end of chapter questions may vary slightly from the US edition. International Editions are typically printed in grayscale, and likely will not have any color throughout the book. New. Books ship from multiple locations depending on availability. All orders are shipped with tracking information. We take pride in our customer service. Please contact us if you have any questions regarding this listing. Seller Inventory # 17021

6. Loose Leaf for the Art of Public Speaking

8. Loose Leaf For The Art Of Public Speaking

9. Loose Leaf for the Art of Public Speaking

10. Loose Leaf for the Art of Public Speaking