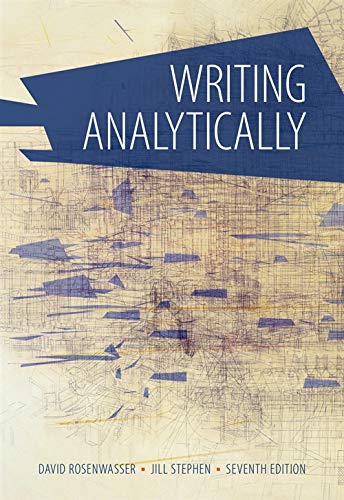 Writing Analytically treats writing as a tool of thought, offering prompts that lead you through the process of analysis and synthesis and help you to generate original, well-developed ideas. The authors of this brief, popular rhetoric believe that learning to write well requires learning to use your writing as a tool to think well. In the new edition, materials are better integrated, more contextualized, and--when possible--condensed.

David Rosenwasser teaches at Muhlenberg College, a small liberal arts college in Pennsylvania, where he has been since the late 1980s. He and Jill Stephen created and implemented the Writing Across the Curriculum program there through a series of faculty seminars. During these seminars, Dr. Rosenwasser and Dr. Stephen discovered that while content faculty from across the disciplines maintained disciplinary-specific writing protocols, they essentially wanted the same thing from student writing: analysis. From this premise, WRITING ANALYTICALLY was born. Dr. Rosenwasser received his B.A. from Grinnell College and his Ph.D. from the University of Virginia in the theory and history of narrative. His current interests include contemporary Irish literature and comic theory. His most recent literary papers include a study of the contemporary Irish writer Edna O'Brien in relation to the work of Joyce and Yeats as well as an analysis of the politics of Bruce Springsteen's albums during the Bush presidency, written collaboratively with a political science professor.

Jill Stephen teaches at Muhlenberg College, a small liberal arts college in Pennsylvania, where she's been since the late 1980s. Along with David Rosenwasser, she created and implemented the Writing Across the Curriculum program there through a series of faculty seminars. In these seminars, they discovered that content faculty from across the disciplines, although they maintained disciplinary-specific writing protocols, essentially wanted the same thing from student writing: analysis. From this premise, their textbook, Writing Analytically, was born. Stephen worked in the expository writing program at New York University under Lil Brannon and Cy Knoblauch. She received her B.A. from the University of Illinois at Champaign-Urbana and received her Ph.D. from NYU on rhetorical theory as evidenced in Renaissance poetry and prose. Aside from her writing with Rosenwasser on composition and writing program administration, she writes on poetry, especially Renaissance lyrics. Her current interests include the poetry of Frank O'Hara, Emily Dickinson, and contemporary Irish women writers.

Shipping: US$ 42.45
From United Kingdom to U.S.A.
Destination, rates & speeds