Items related to ZEALOT: The Life and Times of Jesus of Nazareth

Aslan, Reza ZEALOT: The Life and Times of Jesus of Nazareth 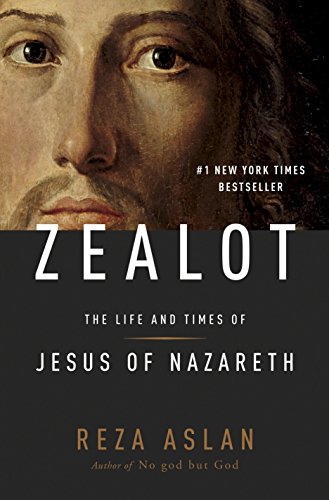 Two thousand years ago, an itinerant Jewish preacher walked across the Galilee, gathering followers to establish what he called the “Kingdom of God.” The revolutionary movement he launched was so threatening to the established order that he was executed as a state criminal. Within decades after his death, his followers would call him God.

Sifting through centuries of mythmaking, Reza Aslan sheds new light on one of history’s most enigmatic figures by examining Jesus through the lens of the tumultuous era in which he lived. Balancing the Jesus of the Gospels against the historical sources, Aslan describes a man full of conviction and passion, yet rife with contradiction. He explores the reasons the early Christian church preferred to promulgate an image of Jesus as a peaceful spiritual teacher rather than a politically conscious revolutionary. And he grapples with the riddle of how Jesus understood himself, the mystery that is at the heart of all subsequent claims about his divinity.

Zealot yields a fresh perspective on one of the greatest stories ever told even as it affirms the radical and transformative nature of Jesus’ life and mission.

“Fascinatingly and convincingly drawn . . . Aslan may come as close as one can to respecting those who revere Jesus as the peace-loving, turn-the-other-cheek, true son of God depicted in modern Christianity, even as he knocks down that image.”—The Seattle Times

“[Aslan’s] literary talent is as essential to the effect of Zealot as are his scholarly and journalistic chops. . . . A vivid, persuasive portrait.”—Salon

“This tough-minded, deeply political book does full justice to the real Jesus, and honors him in the process.”—San Francisco Chronicle

“A special and revealing work, one that believer and skeptic alike will find surprising, engaging, and original.”—Jon Meacham, Pulitzer Prize–winning author of Thomas Jefferson: The Art of Power

Q. Why did you title your biography of Jesus of Nazareth Zealot?

A. In Jesus' world, zealot referred to those Jews who adhered to a widely accepted biblical doctrine called zeal. These “zealous” Jews were strict nationalists who preached the sole sovereignty of God. They wanted to throw off the yoke of Roman occupation and cleanse the Promised Land of all foreign elements. Some zealots resorted to extreme acts of violence against both the Roman authorities and the Jewish ‘collaborators,” by which they meant the wealthy Temple priests and the Jewish aristocracy. Others refrained from violence but were no less adamant about establishing the reign of God on earth. There is no evidence that Jesus of Nazareth was himself a violent revolutionary (though his views on the use of violence were more complex than it is often assumed). However, Jesus’ actions and his teachings about the Kingdom of God clearly indicate that he was a follower of the zealot doctrine, which is why he, like so many zealots before and after him, was ultimately executed by Rome for the crime of sedition.

A. I certainly rely on the gospels to provide a narrative outline to my biography of Jesus of Nazareth, but my primary source in recreating Jesus’ life are historical writings about first century Palestine, like the Jewish historian Flavius Josephus, as well as Roman documents of the time. The gospels are incredible texts that provide Christians with a profound framework for living a life in imitation of Christ. The problem, however, is that the gospels are not, nor were they ever meant to be, historical documentations of Jesus’ life. These are not eyewitness accounts of Jesus’ words and deeds. They are testimonies of faith composed by communities of faith written many years after the events they describe. In other words, the gospels tell us about Jesus the Christ, not Jesus the man. The gospels are of course extremely useful in revealing how the early Christians viewed Jesus. But they do not tell us much about how Jesus viewed himself. To get to the bottom of that mystery, which is what I try to do in the book, one must sift through the gospel stories to analyze their claims about Jesus in light of the historical facts we know about the time and world in which Jesus lived. Indeed, I believe that if we place Jesus firmly within the social, religious, and political context of the era in which he lived, then, in some ways, his biography writes itself.

Q. You write in the book that you became an evangelical Christian in High School, but that after a few years, you abandoned Christianity and returned to the faith of your forefathers: Islam. Why did you decide to make this change and how did it affect how you understood the life and work of Jesus of Nazareth.

A. When I was fifteen years old I heard the gospel story for the first time and immediately accepted Jesus into my heart. I had what Christians refer to as “an encounter with Christ.” I spent the next five years as an evangelical Christian, and even spent some time traveling around the United States spreading the gospel message. But the more I read the Bible – especially in college, where I began my formal study of the New Testament – the more I uncovered a wide chasm between the Jesus of history and the Jesus I learned about in church. At that same time, through the encouragement of one of my professors, I began to reexamine the faith and traditions of my forefathers and returned to Islam. But the irony is that once I detached my academic study of Jesus from my faith in Christ, I became an even more fervent follower of Jesus of Nazareth. What I mean to say is that I live my life according to the social teachings preached by Jesus two thousand years ago. I take his actions against the powers of his time and his defense of the poor and the weak as a model of behavior for myself. I pray, as a Muslim, alongside my Christian wife, and together we teach our children the values I believe Jesus represents. The man who defied the will of the most powerful empire the world had ever known – and lost – is so much more real to me than the Jesus I knew as a Christian. So in a way, this book is my attempt to spread the good news of Jesus the man with the same passion that I once applied to spreading the good news of Jesus the Christ.

Q. What do you hope readers, especially religious readers, take away from your book?

A. My hope is that this book provides readers with a more complete sense of the world in which Jesus lived. We cannot truly understand Jesus’ words and deeds if we separate them from the religious and political context of his time. Regardless of whether you think of Jesus as a prophet, a teacher, or God incarnate, it is important to remember that he did not live in a vacuum. Whatever else Jesus was, he was, without question, a man of his time. This is true for all of us. The key to understanding who Jesus was and what Jesus meant lies in understanding the times in which he lived. That’s what this book does. It drops you in the middle of Jesus’ world and helps you understand the context out of which he arose and in which preached.

Reza Aslan is an acclaimed writer and scholar of religions whose books include No god but God: The Origins, Evolution, and Future of Islam and Zealot: The Life and Times of Jesus of Nazareth. He is also the author of How to Win a Cosmic War: God, Globalization, and the End of the War on Terror (published in paperback as Beyond Fundamentalism), as well as the editor of Tablet & Pen: Literary Landscapes from the Modern Middle East. He lives in Los Angeles with his wife and three sons.

Zealot The Life and Times of Jesus of Nazareth