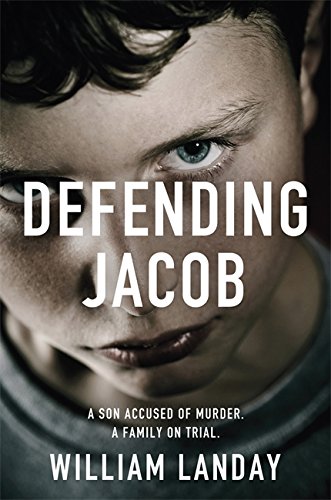 Book Description PRESUMED INNOCENT meets WE NEED TO TALK ABOUT KEVIN in the thriller of the year Product Description When a teenaged boy is discovered stabbed to death in the woods adjoining the local high school, a wave of shock ripples through the suburban community of Newton, outside of Boston. Assistant district attorney Andy Barber is used to dealing with murder and its after-effects, but with his own son, Jacob, also a student at the school, he too is anxious for a swift arrest and conviction. But as the kids appear to be stonewalling the cops and the investigation stalls, evidence emerges that ties Jacob to the crime - and suddenly Andy faces a very different challenge: preventing his son from being convicted of murder. Together with his wife, Laurie, the family closes ranks in the midst of an increasingly hostile community as Andy prepares for the trial of his life, the one trial he cannot afford to lose. Especially when the emergence of his own dark family secrets threatens to undermine Jacob's defence. And as the drama reaches its climax, Andy and Laurie have to face every parent's toughest questions: how well do you really know your own child, and how far would you go to save them? About the Author William Landay was an assistant district attorney before he turned to writing. He lives in Boston.

Amazon Best Books of the Month, February 2012: A fast, compelling, and compulsively readable courtroom drama, Defending Jacob tells the story of a district attorney’s son who is accused of killing a classmate. As the father attempts to prove his son’s innocence, Landay explores uncomfortable territory: can a tendency toward violence be inherited? Is the capacity for murder a genetic disposition? The author, a former district attorney, gets the taut nuances just right, capturing the subtleties of a trial in a packed courtroom, where a small rustle or murmur can signify a lot. In the end Landay pulls off a clever plot device that doesn’t reveal itself until the final pages. --Neal Thompson

Chevy Stevens grew up on a ranch on Vancouver Island and still calls the island home. She is the New York Times bestselling author of the novels Still Missing and Never Knowing.

From the first few pages of Defending Jacob, I knew this book was special. More than an exciting courtroom drama that combines the best elements of a legal and psychological thriller, it also delves into the heart of a family, and will rip yours out in the process.

When a young boy is found brutally murdered in the woods in a peaceful New England town, his body hastily covered with leaves, the community is shaken to its core. No one more so than Andy Barber, a well-respected assistant district attorney whose fourteen-year-old son, Jacob, went to school with the boy. Sure, Jacob is a typical moody teenager, hiding in his room all day with his headphones and lap top, but Andy loves him more than anything in this world--and would do anything to protect him.

While Andy's wife, Laurie, struggles with the possibility that there's a killer on the loose and their own son could be next, Andy's determined to find the culprit and bring him to justice. He immerses himself in a maelstrom of angry parents demanding answers, police hell-bent on making an arrest, and the complicated lives of teenagers, with their own secrets, and reasons for keeping them.

When, in a stunning turn of events, Jacob is arrested for the crime, both Andy and Laurie are stalwart in their defense of their son: there's no way their child could've committed this terrible act. As more shocking facts are revealed and lies uncovered, Andy is pushed to the edge and his twenty-year marriage tested. Beautiful Laura, his college sweetheart and love of his life, begins to fade in front of his eyes, crumbling under the pressure of the trial, the public accusations, and the weight of her own doubts--in her son and her husband. When truths about Andy's past comes to surface, he must chose between the life he thought he'd left behind, and the father he wants to be.

Defending Jacob raises the question: how far would you go to protect your family? But it also leaves you wondering if anyone could answer that question, and whether we really know what we're capable of when push comes to shove.

Let's pray we never have to find out.

Phillip Margolin has been a Peace Corps Volunteer, a school teacher, and is the author of 15 New York Times bestsellers. He spent a quarter century as a criminal defense attorney during which he handled thirty homicide cases, including twelve death penalty cases, and argued at the United States Supreme Court. He is a co-founder of Chess for Success, a non-profit that uses chess to teach elementary school children study skills. His latest novel, Capitol Murder will be released in April, 2012.

One perk of being a bestselling author is that you are sent advance reading copies (ARCs) of books by first time authors, or published authors whose editors believe have written a breakout novel. The ARC is sent by the writer's editor in hopes that you will write a "blurb," which is a sentence or two praising the book that can be used in advertisements. The books I blurb range from fun reads to very good reads. Then there is the rare book that knocks my socks off. William Landay's Defending Jacob is one of these gems. It is a legal thriller, but so are To Kill a Mocking Bird, Snow Falling on Cedars and Anatomy of a Murder. Defending Jacob, like these classics, separates itself from the pack because it is also a searing work of literary fiction.

At the heart of Landay's exceptional novel is a parent's worst nightmare. Assistant district attorney Andy Barber, his wife, Laurie, and their teenage son, Jacob, are living an idyllic existence in a middle class Massachusetts suburb until one of Jacob's classmates is stabbed to death in the picturesque park where the locals jog, walk their dogs and picnic. It soon becomes clear that Jacob is the prime suspect and the Barbers have to confront the possibility that the child they have doted from birth may be a sociopathic killer.

Andy takes a forced leave of absence from his job and helps defend the son he loves from a charge he cannot believe is true. Is he engaging in self-deception? How far will he go to protect his family? Laurie wonders if something she did as a parent has created a monster and her guilt destroys her. And then there is Jacob. Is he a typical angst filled teenager or a psychopathic monster? Landay skillfully keeps the reader guessing about Jacob's culpability and true nature up to the shocking final chapters.

What makes Defending Jacob special is the way Landay gives the reader the twists, turns and surprises found in the best legal thrillers while making its centerpiece the tragedy faced by a normal family who are thrust into a nightmare.

William Landay was an assistant district attorney before he turned to writing. He lives in Boston.