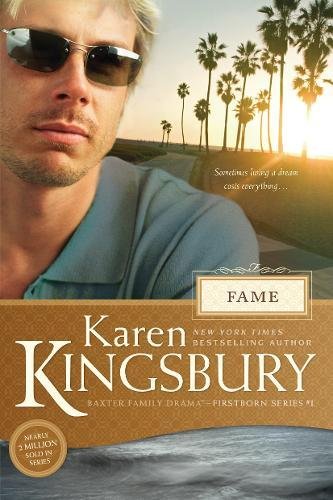 A fresh new look for the bestselling Firstborn series―the second installment in the continuing Baxter Family Drama from America’s number one inspirational novelist, Karen Kingsbury. Revisit the Baxter family in all their life-changing events, or share the series with someone who hasn’t discovered it yet.

In this first book, Hollywood A-lister Dayne Matthews returns to LA after his shocking discovery in Karen’s bestselling novel Reunion. Though his life is filled with fame, fortune, and paparazzi, his heart is pulling him toward a woman and a family who have no idea how their lives are tied to his. Meanwhile, Katy Hart has finally found contentment as the director of Christian Kids Theater in Bloomington, Indiana. But that changes in an instant when she meets Dayne Matthews and he promises a future she left in her past.

A Dream Come True
Dayne Matthews is at the top of the Hollywood list―a successful, popular actor with a bright future. He has everything a man could want―fame, fortune, and friends. But his heart is pulling him toward a woman and a family who have no idea how their lives are tied to his. . . .

A Wounded Past
Katy Hart, the director of Christian Kids Theater, is immersed in her new life. Glad to move on and forget her past, she finally feels at home in Bloomington, Indiana. With a successful community theater and the love of many friends, she thinks she is content. But that changes in an instant when she meets Dayne Matthews and he promises a future she left in her past.

A Painful Promise
As Elizabeth Baxter lay dying, John made a promise that he must keep. A promise to reconnect the entire family―including the one child they never spoke of.

A story of hope, healing, and God’s divine leading― even in the face of impossible circumstances

Karen Kingsbury is currently America's best-selling inspirational author. She has written more than 30 of her Life-Changing Fiction titles and has nearly 5 million books in print. Dubbed by Time magazine as the Queen of Christian Fiction. Her fiction has made her one of the country's favorite storytellers, and one of her novels-Gideon's Gift-is under production for an upcoming major motion picture release. Her emotionally gripping titles include the popular Redemption series, the Firstborn series, Divine, One Tuesday Morning, Beyond Tuesday Morning, Oceans Apart, and A Thousand Tomorrows.Karen and her husband, Don, live in the Pacific Northwest and are parents to one girl and five boys, including three adopted from Haiti.