Items related to The Dark Tower V: The Wolves of the Calla (5) (The... 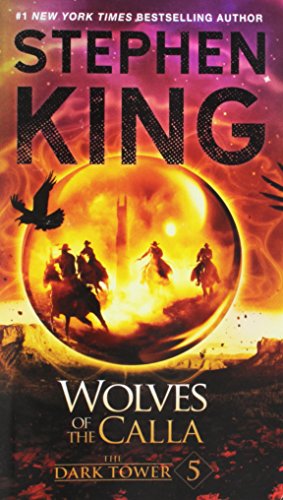 Set in a world of extraordinary circumstances, filled with stunning visual imagery and unforgettable characters, the DARK TOWER series is unlike anything you have ever read.

Here is the fifth installment, "one of the strongest entries yet in what will surely be a master storyteller's magnum opus" (Locus).

Roland Deschain and his ka-tet are bearing southeast through the forests of Mid-World on their quest for the Dark Tower. Their path takes them to the outskirts of Calla Bryn Sturgis. But beyond the tranquil farm town, the ground rises to the hulking darkness of Thunderclap, the source of a terrible affliction that is stealing the town's soul. The wolves of Thunderclap and their unspeakable depredation are coming. To resist them is to risk all, but these are odds the gunslingers are used to. Their guns, however, will not be enough....

In their continuing journey toward the Dark Tower, Roland and his KA-TET--three twentieth-century New Yorkers, now gunslingers--encounter a peaceful village, Calla Bryn Sturgis, which is suffering attacks on its children by violent robotic wolves. Through sinister understatement, George Guidall conveys the horror of the wolves and the growing tension of the group's arrival at their destination. Guidall shows startling ineptitude for the protagonist's Maine accent but invests the Calla people with a language all their own, identifiable and consistent throughout the production. His characterization of series character Susannah Dean somewhat reprises Frank Muller's excellent portrayal, but, for the most part, Guidall underplays vocal distinctions among the characters. R.P.L. © AudioFile 2004, Portland, Maine-- Copyright © AudioFile, Portland, Maine