Items related to The Forgotten Garden: A Novel 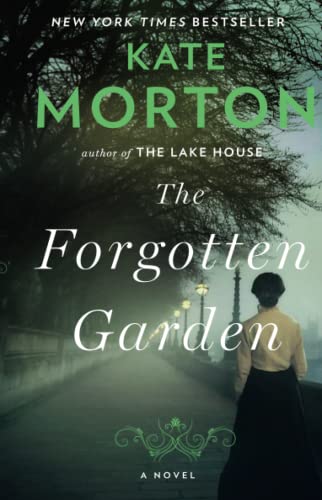 From the #1 internationally bestselling author of The House at Riverton, a novel that takes the reader on an unforgettable journey through generations and across continents as two women try to uncover their family’s secret past

A tiny girl is abandoned on a ship headed for Australia in 1913. She arrives completely alone with nothing but a small suitcase containing a few clothes and a single book—a beautiful volume of fairy tales. She is taken in by the dockmaster and his wife and raised as their own. On her twenty-fi rst birthday, they tell her the truth, and with her sense of self shattered and very little to go on, "Nell" sets out to trace her real identity. Her quest leads her to Blackhurst Manor on the Cornish coast and the secrets of the doomed Mountrachet family. But it is not until her granddaughter, Cassandra, takes up the search after Nell’s death that all the pieces of the puzzle are assembled. A spellbinding tale of mystery and self-discovery, The Forgotten Garden will take hold of your imagination and never let go.

Amazon Best of the Month, April 2009: Like Frances Hodgson Burnett's beloved classic The Secret Garden, Kate Morton's The Forgotten Garden takes root in your imagination and grows into something enchanting--from a little girl with no memories left alone on a ship to Australia, to a fog-soaked London river bend where orphans comfort themselves with stories of Jack the Ripper, to a Cornish sea heaving against wind-whipped cliffs, crowned by an airless manor house where an overgrown hedge maze ends in the walled garden of a cottage left to rot. This hidden bit of earth revives barren hearts, while the mysterious Authoress's fairy tales (every bit as magical and sinister as Grimm's) whisper truths and ignite the imaginary lives of children. As Morton draws you through a thicket of secrets that spans generations, her story could cross into fairy tale territory if her characters weren't clothed in such complex flesh, their judgment blurred by the heady stench of emotions (envy, lust, pride, love) that furtively flourished in the glasshouse of Edwardian society. While most ache for a spotless mind's eternal sunshine, the Authoress meets the past as "a cruel mistress with whom we must all learn to dance," and her stories gift children with this vital muscle memory. --Mari Malcolm

Read an excerpt and the reading group guide for The Forgotten Garden.

Q: The Forgotten Garden has some marvelous parallels with Frances Hodgson Burnett's The Secret Garden, and Burnett even makes an appearance in your book as a guest at a garden party. Did her book inspire portions of your story?

A: The Secret Garden was one of my favourite books when I was a little girl. Along with stories like The Faraway Tree and The Lion, the Witch, and the Wardrobe, it's one of many classic childhood tales in which children escape from the adult world to a place in which their imagination is allowed free rein. However, it wasn't my intention to reference The Secret Garden when I first started writing.

In fact, The Forgotten Garden (which was called The Authoress until the final draft!) began with a family story: when she was 21, my grandmother's father told her that she wasn't his biological child. Nana was so deeply affected by this knowledge that she told no one until she was a very old lady and finally confided in her three daughters. When I learned Nana's secret, I was struck by how fragile a person's sense of self is and knew that one day I would write a story about someone who experienced a similar life-changing confession.

When I began to write about Nell, I knew that her mystery was going to lead her to an English cottage, but the other details were hazy. It was while I was auditioning English locations for my book that I came across mention of the Lost Gardens of Heligan in Cornwall. My interest was piqued, and I began reading everything I could find about this place: a grand country estate with astounding gardens that had been locked and forgotten after its gardening staff were killed during the first world war and the owners moved away.

When it was rediscovered in the late 20th century, nature had reclaimed the estate, but the bones of the garden lay deep beneath the overgrowth. This story really fired my imagination and I knew that I'd not only found my location--Cornwall--but that I would also need a forgotten garden in my story!

I was also eager to play with 19th-century gothic conventions in The Forgotten Garden. I adore books like Jane Eyre and Wuthering Heights, and I wanted a gloomy old house, wicked aunts, secretive servants, hidden identities, mysterious whisperings--the lot. But when my garden grew walls, I suddenly remembered The Secret Garden, and with my theme of fairy tales and storytellers and the vital role that such things play in a child's imagination, I couldn't resist introducing parallels (including a walk-on role for Frances Hodgson Burnett). It was a way of referencing my own childhood influences--Enid Blyton and the Famous Five get a couple of nods throughout, too!--and was a lot of fun.

Q: Both The Forgotten Garden and The House at Riverton, your first novel, celebrate the imaginative lives of children, and the role that books and family legends play in inspiring their creative life. Which books fired your imagination as a child? Do you think fairy tales play a role in preparing children for life's harsher realities, and giving them courage? As children spend more time being entertained--by TV and video games--and less time inventing their own entertainments and exploring the natural world, what are we losing?

A: I read voraciously as a child, and the more I write the more I realize that an essential part of my character (and certainly my inner writer) was formed in those early years. Enid Blyton was my first and my favourite (The Faraway Tree, The Enchanted Wood, The Secret Seven), sparking in me a lifetime love of English countryside, dark, creepy woods, and hidden mysteries. I also loved Anne of Green Gables, The Railway Children, Roald Dahl, and fairy tales of all description, and had a mighty impressive collection of second-hand Trixie Belden books (collected when my mum, an antique dealer, dragged us to second-hand shops with her).

I agree that fairy tales teach children about life's harsher realities. They are our society's fables and, in their true form, often contain messages that aren't easy to hear. There's something compelling about their simple (sometimes brutal) honesty though, and their heightened style creates a narrative distance that sets them apart from more realistic children's fiction so that the events depicted are understood to be taking place in a world that is not our own. I think we sometimes underestimate the ability of children to recognize and process intelligent concepts, and sort the literal from the fairy tale.

Q: Both of your first two novels leap between the present and past, with much of the story happening in the late Victorian and Edwardian eras, in the lead-up to World War I. What fascinates you about that particular period?

A: The early decades of the 20th century fascinate me because they describe a moment of immense social, political, and cultural transition, and because change ignites conflict (on a large scale, as in the culminating war, but also on a much smaller inter-personal level), which makes it excellent fodder for a writer interested in stories about people. Sociocultural expectations of women and the lower classes were changed indelibly as a consequence of the first world war, so a person who was 18 in 1912 had a markedly different perception of their place in the world as compared to a person who was 18 in 1922.

I'm particularly interested in the way the past is tethered to the present: that is, I like to write about the past insofar as it is a place to which we are still connected in some way. I have a rather gothic insistence on the refusal of the past to remain dead and buried!

The literary gothic (particularly that of the 19th-century novel) is a genre for which I bear a special fondness. I wrote my masters on Tragedy in Victorian Novels and my PhD topic concerns the use of gothic tropes in contemporary fiction. My interest isn't so much in the supernatural aspects of the gothic (apparitions and the like) as much as metaphorical ghosts--the haunting of the present by the past; guilt; memory; identity issues; twins and doubles; the complicated ties of family; anxieties over technology, etc. I think the gothic resonates strongly in our technological time, not least in matters of identity. Computers and the surfacing of social networking sites have changed the way we represent ourselves and interact with other people; medical advances mean we are able to alter our appearances in ways we never could before; we are even beginning to manipulate genes and use science to aid and affect conception. This is all fertile ground for a fiction writer!

Q: Your next novel, The Distant Hours, will be set in World War II England. Can you reveal any other details?

A: Not a lot, I'm afraid--I'm superstitious about speaking too much about my people when their stories are still unfolding!--but here's a little tiny taste: The Distant Hours is set in 1940, during the period in which the English were worried that the Germans might land on the beaches any day. It takes place in a castle in Kent (with a medieval tower and a huge ancient wood!), where the unexpected arrival of a stranger causes ripples in the household that trigger a tragedy....

Kate Morton is the award-winning, New York Times bestselling author of The House at Riverton, The Forgotten Garden, The Distant Hours, The Secret Keeper, The Lake House, and The Clockmaker’s Daughter. Her books are published in 34 languages and have been #1 bestsellers worldwide. She is a native Australian, holds degrees in dramatic art and English literature. She lives with her family in London and Australia.

The Forgotten Garden: A Novel Paperback