Items related to The Anthologist: A Novel

Baker, Nicholson The Anthologist: A Novel

The Anthologist: A Novel 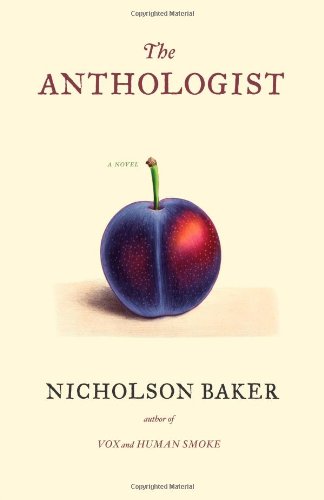 The Anthologist is narrated by Paul Chowder -- a once-in-a-while-published kind of poet who is writing the introduction to a new anthology of poetry. He's having a hard time getting started because his career is floundering, his girlfriend Roz has recently left him, and he is thinking about the great poets throughout history who have suffered far worse and deserve to feel sorry for themselves. He has also promised to reveal many wonderful secrets and tips and tricks about poetry, and it looks like the introduction will be a little longer than he'd thought.

What unfolds is a wholly entertaining and beguiling love story about poetry: from Tennyson, Swinburne, and Yeats to the moderns (Roethke, Bogan, Merwin) to the staff of The New Yorker, what Paul reveals is astonishing and makes one realize how incredibly important poetry is to our lives. At the same time, Paul barely manages to realize all of this himself, and the result is a tenderly romantic, hilarious, and inspired novel.

Nicholson Baker is the author of nine novels and four works of nonfiction, including Double Fold, which won a National Book Critics Circle Award. His work has appeared in The New Yorker, Harper's, and The New York Review of Books. He lives in Maine with his family.

What is poetry? Poetry is prose in slow motion. Now, that isn’t true of rhymed poems. It’s not true of Sir Walter Scott. It’s not true of Longfellow, or Tennyson, or Swinburne, or Yeats. Rhymed poems are different. But the kind of free-verse poems that most poets write now—the kind that I write—is slow-motion prose.

My life is a lie. My career is a joke. I’m a study in failure. Obviously I’m up in the barn again—which sounds like a country song, except for the word “obviously.” I wonder how often the word “obviously” has been used in a country song. Probably not much, but I don’t know because I hardly listen to country, although some of the folk music I like has a strong country tincture. Check out Slaid Cleaves, who lives in Texas now but grew up right near where I live.

So I’M UP in the second floor of the barn, where it’s very empty, and I’m sitting in what’s known as a shaft of light. The light leans in from a high window. I want to adjust my seat so I can slant my face totally into the light. Just ease it into the light. That’s it. If this barn were a prison cell, this would be the moment of the day that I would look forward to. Sitting here in the long womanly arm of light, the arm that reaches down like Anne Boleyn’s arm reaching down from her spot-lit height. Not Anne Boleyn. Who am I thinking of? Margot Fonteyn, the ballet dancer. I knew there was a Y in there.

There’s one droopy-bottomed wasp diving back and forth, having some fun with what’s available. I can move my head a certain way, and I feel the sun warming up the clear flamingos that swim around in my eyeballs. My corneas are making infinity symbols under their orange-flavored lids.

I can even do eyelid wars. Do you do that? Where you try as hard as you can to look up with your eyeballs, rolling them back in your head, but with your eyes closed. Your eyelids will keep pulling your eyes back down because of the inter-lock between the two sets of muscles. Try it. It’s a good way of passing the time.

Don’t chirp at me, ye birdies! I’ve had enough of that kind of chirpage. It cuts no grease with me.

WHEN I COME across a scrap of poetry I like, I make up a tune for it. I’ve been doing this a lot lately. For instance, here’s a stanza by Sir Walter Scott. I’ll sing it for you. “We heard you in our twilight caves—” Try it again.

It’s written in what’s called a ballad stanza. Four lines, four beats in each line, and the third line drives toward the fourth. Notes of joy can pierce the waves, Sir Walter says. In other words, notes of joy can cut through the mufflement. Notes of joy have a special STP solvent in them that dissolves all the gluey engine deposits of heartache. War and woe don’t have anything like the range and reach that notes of joy do.

And yes, of course, there are things that should be said about iambic pentameter, and I don’t want to lose sight of that. I don’t want to slight “the longer line.” I hope we can get to that fairly soon. My theory—I can’t resist giving you a little glimpse of it here—my theory is that iambic pentameter is in actuality a waltz. It’s not five-beat rhythm, even though “pent” means five, because five beats would be totally offkilter and ridiculous and would never work and would be a complete disaster and totally unlistenable. Pentameter, so called, if you listen to it with an open ear, is a slow kind of gently swaying three-beat minuetto. Really, I mean it.

And what romanticism did was to set the pentameter minuet aside and try to recover the older, more basic ballad rhythm. Somewhere along the way, so the Romantic poets felt, the humanness and the singingness and the amblingness of lyric poetry became entangled in frippery and parasols, and that’s because we stopped hearing those four basic pacing beats. That’s what Walter Scott was bringing back when he published his border ballads, and what Coleridge was bringing back when he wrote the Kubla Khan song and “The Rime of the Ancient Mariner.” They were bringing back the ballad. “Where Alph, the sacred river ran”—four beats. “Through caverns measureless to man”—four beats. And it’s the basis of song lyrics, too, because lyric poetry is song lyrics, that’s why it’s called lyric poetry.

YOU’RE OUT THERE. I’m out here. I’m sitting in the sandy driveway on my white plastic chair. There’s a man somewhere in Europe who is accumulating a little flotsam heap of knowledge about the white plastic chair. He calls it the “monobloc” chair. A word I’ve never used. Monobloc, no K. And I’m sitting in one. Its arms are blindingly white in the sun.

His name is Jens Thiel. God, I love Europeans. Jens. Especially the ones from smaller countries. Holland, Denmark, Sweden, Belgium. I love those places. And of course: Amsterdam. What a great name for a city. Paul Oakenfold has a piece of trance music called “Amsterdam.” His name is Paul, and my name is Paul. Paul: What is that crazy U doing there? Paw—U—L.

A woman is walking by on the street. Ah, it’s Nanette, my neighbor. I knew it was her. She’s carrying a garbage bag. She’s picking up trash, I guess. Nan does that. She has an early-morning stroll sometimes, and I’ve noticed she takes along an empty trash bag tucked into her back pocket. I’m going to wave to her. Hi! Hello! She waved back.

Yes, she’s picking up a beer can and shaking it out, and now she’s putting it in that trash bag. The beer can is faded to a pale violet color. I think I can almost hear the soft rustle of the bag as things fall into it. Pfft. Pfft. Sometimes maybe a clink.

Nan is or soon will be divorced from her husband, Tom— Tom, who every weekend went windsurfing in a blue-armed wetsuit. She has a son named Raymond, a good kid who plays lacrosse. And she now evidently has a new boyfriend, a curly-haired man named Chuck, annoyingly handsome.

My neighbor Nan seems to be fully committed to her new flame, Chuck. His car is in the driveway again. I suppose that’s a good thing. She deserves to be happy with a good-looking man like Chuck.

Roz, the woman who lived with me in this house for eight years, has moved away.

My dog is shedding because it’s summer, and then the birds, that keep chirping and chirping, make nests of the dog hair. It’s good for that.

I wish I could smoke pot. What would that do? I don’t even know where I would get pot around here. Somebody said the wispy dude with the pointy sideburns who works at the pet-food store. Could I maybe offer some to Roz, as a dramatic gesture? I’ve never bought pot in my life. Maybe it’s time. No, I don’t think it is. Too involved. But I think I will step in from the driveway for a moment to get a clear glass bottle of Newcastle Brown Ale. I do love a palate cleanser of pure Newcastle Brown.

Roz is kind of short. I’ve always been attracted to short women. They’re usually smarter and more interesting than tall women and yet people don’t take them as seriously. And it’s a bosomy kind of generous smartness, often. But she’s moved out, so I should stop talking about her.

I’m a little sick of all the bird chirping, frankly. They just don’t stop. I mowed the lawn yesterday so I wouldn’t have to hear their racket. “Chirtle chirtle.” It’s constant. And as soon as I started mowing I knew this was the best thing I could be doing. Walking behind this armful of noise, going around, turning the corner I’d already turned, circumventing the overturned canoe. I ducked under the clothesline that Roz strung last year between the barn and the box elder tree. The white rope is now a lovely dry gray color. She used to hang many beautiful tablecloths and dishtowels on that clothesline. I should use it myself, instead of the dryer, which is making a thumping noise anyway, and then if she drove by she’d see that I was being a responsible person who dried my clothes in the sun. I wish I’d taken a picture of that clothesline with her faded shirts on it. No bras that I remember, but you can’t expect bras necessarily on a clothesline. You have to go to Target to see bras hanging nobly out for the public gaze.

I got in bed last night and I closed my eyes and I lay there and then a powerful urge came over me to cross my eyes. I thought of tragic people like Don Rickles, Red Skelton, people like that. Broken professional entertainers who maybe once had been funny. And now they were in Vegas, on cruise control, using their eye-crossing to allude to their early period of genuine funniness. Or they were dead.

So I crossed my eyes with my eyes closed. And I saw something in the dark: two crescent moons on the outside of my vision, which were the new moons of strain. I could...

3. The Anthologist: A Novel