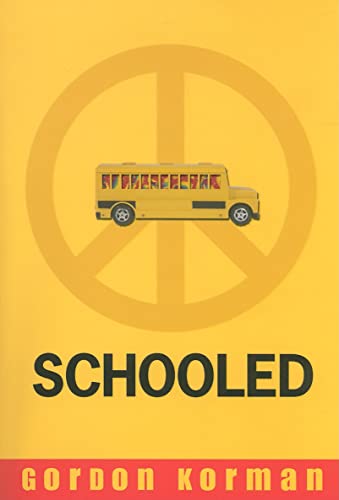 Capricorn Cap Anderson has been homeschooled by his hippie grandmother, Rain. When Rain is injured in a fall, Cap is forced to attend the local middle school. Although he knows a lot about Zen Buddhism, nothing has prepared him for the politics of public school.

Gordon Korman is one of the most popular young adult and middle grade authors writing today. He published his first book at the young age of fourteen and has been going strong ever since. A tireless self-promoter, Gordon is constantly traveling across the country to visit different schools. He and his wife, a teacher, live on Long Island with their three children.

*Starred Review* Homeschooled on an isolated "alternate farm commune" that has dwindled since the 1960s to 2 members, 13-year-old Cap has always lived with his grandmother, Rain. When she is hospitalized, Cap is taken in by a social worker and sent—like a lamb to slaughter—to middle school. Smart and capable, innocent and inexperienced (he learned to drive on the farm, but he has never watched television), long-haired Cap soon becomes the butt of pranks. He reacts in unexpected ways and, in the end, elevates those around him to higher ground. From chapter to chapter, the first-person narrative shifts among certain characters: Cap, a social worker (who takes him into her home), her daughter (who resents his presence there), an A-list bully, a Z-list victim, a popular girl, the school principal, and a football player (who unintentionally decks Cap twice in one day). Korman capably manages the shifting points of view of characters who begin by scorning or resenting Cap and end up on his side. From the eye-catching jacket art to the scene in which Cap says good-bye to his 1,100 fellow students, individually and by name, this rewarding novel features an engaging main character and some memorable moments of comedy, tenderness, and reflection. Pair this with Jerry Spinelli's 2000 Stargirl (the sequel is reviewed in this issue) for a discussion of the stifling effects of conformity within school culture or just read it for the fun of it. Phelan, Carolyn

Book Description Paperback. Condition: New. Reprint. Language: English. Brand new Book. Gordon Korman's best-known bestseller! A quirky homeschooled kid must learn how to fit in (or stand out) at public school in this heartwarming fish-out-of-water classic. Capricorn Anderson had never watched a television show before. He'd never tasted a pizza. He had never even heard of a wedgie. And he had never, in his wildest dreams, thought of living anywhere but Garland Farm commune with his hippie caretaker, Rain. Capricorn (Cap for short) lived every day of his life on Garland Farm growing fruits and vegetables. He was homeschooled by Rain, the only person he knew in the world. Life was simple for Cap. But when Rain falls out of a tree while picking plums and is hospital-ridden, he has to attend the local middle school and live with his new guidance counselor and her irritable daughter. While Cap knew a lot about Zen Buddhism, no amount of formal education could ready him for the trials and tribulations of public middle school. Cap doesn't exactly fit in at Claverage Middle School (dubbed C Average by the kids). He has long, ungroomed hair, wears hemp clothes, and practices Tai Chi out on the lawn. His weirdness basically makes him the biggest nerd in school. This is great news for Zach Powers, big man on campus. He can't wait to instate the age-old tradition in C-Average School: The biggest nerd is nominated for class president -- and wins. So when Cap becomes president, he is more puzzled than ever. But as Cap begins to take on his duties, the joke starts to turn on Zach. Will Cap turn out to be the greatest President in the history of C-Average School? Or the biggest punchline?. Seller Inventory # ABZ9781423105169