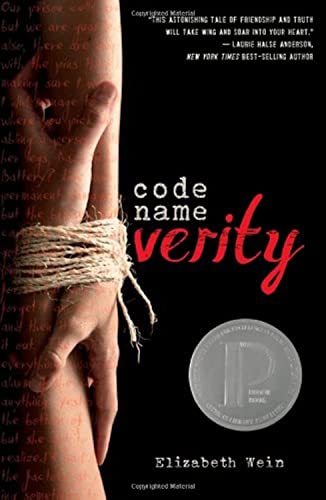 Oct. 11th, 1943-A British spy plane crashes in Nazi-occupied France. Its pilot and passenger are best friends. One of the girls has a chance at survival. The other has lost the game before it's barely begun.

When "Verity" is arrested by the Gestapo, she's sure she doesn't stand a chance. As a secret agent captured in enemy territory, she's living a spy's worst nightmare. Her Nazi interrogators give her a simple choice: reveal her mission or face a grisly execution.

As she intricately weaves her confession, Verity uncovers her past, how she became friends with the pilot Maddie, and why she left Maddie in the wrecked fuselage of their plane. On each new scrap of paper, Verity battles for her life, confronting her views on courage, failure and her desperate hope to make it home. But will trading her secrets be enough to save her from the enemy?

A Michael L. Printz Award Honor book that was called "a fiendishly-plotted mind game of a novel" in The New York Times, Code Name Verity is a visceral read of danger, resolve, and survival that shows just how far true friends will go to save each other.

Amazon Best Teen Books of the Month, May 2012: Rich in historical detail and intrigue, Code Name Verity is a vivid reminder of what makes historical fiction so compelling. In exchange for a temporary stay of execution and lesser forms of torture, a young female spy captured in Nazi-occupied France writes a confession of her activities in the Resistance. Her story is that of two women who should never have crossed paths, yet were destined to become the best of friends and embark upon the covert mission that would determine which of them would live or die. Courage born of friendship, fierce hope, and surprising ironies abound in this spell-binding novel that will appeal to teens and adult readers alike.--Seira Wilson

Elizabeth Wein (www.elizabethwein.com) was born in New York City, grew up abroad, and currently lives in Scotland with her husband and two children. She is an avid flyer of small planes and is the editor of the Scottish Aero Club's newsletter. She also holds a PhD in Folklore from the University of Pennsylvania.