Items related to Imperfect Endings: A Daughter's Tale of Life and...

Imperfect Endings: A Daughter's Tale of Life and Death 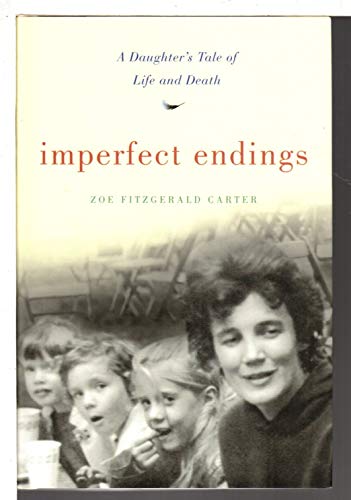 · Wrenching, provocative, and surprisingly funny: After twenty years of living with terminal illness, Zoe’s mother decided to end her life—and asked her three daughters for their assistance. For months, the decision drags on as her mother changes her methods and schedule, and the negotiations stir up old memories, sibling rivalries, and questions about family loyalty. Eventually there is compromise and courage and Zoe’s mother has her happy — if imperfect — ending..

· A controversial subject—assisted suicide: Zoe and her sisters struggle to accept the imminent death of their mother, circling around the same questions: Who will help her? Will they go to jail? Can they bear to let her die alone? With a doctor prescribing lethal doses of sleep medication, a visit from a member of the Hemlock Society’s “Final Exit Network,” and the temptations of overdosing on morphine, the issues and people in Imperfect Endings are at the center of the debate on assisted suicide. .

· An award-winning new voice: An acclaimed journalist, Zoe won first place in the 2008 Pacific Northwest Writers’ Association literary contest and was a finalist at the San Francisco Writer’s Conference for Imperfect Endings . .

Zoe FitzGerald Carter is a graduate of Columbia Journalism School and has written for numerous publications including New York magazine, The New York Observer, Premiere, and various national magazines. Imperfect Endings is her first memoir. It won first place in the 2008 Pacific Northwest Writer's Association's literary contest and was a finalist at The San Francisco Writer's Conference. Zoe lives in Northern California with her husband and two daughters.

I don’t have to answer the phone. On my knees in the bathroom, daughters just settled into the tub, I have the perfect excuse to ignore it. Let the machine pick it up instead. But I push off my knees and head for the door, my brain several steps behind my body as it usually is by this time of day.

Only then do I pause, reluctant to leave the steamy warmth of the bathroom, the giddiness of my naked children who are lolling at one end of the tub, pouring water on each other. At four and eight, Lane and Clara are hardly at risk for drowning, but I remind them to be careful—keep the water in the tub, hold off on the shampoo—and step out into the bedroom.

Shading my eyes from the blinding late-day sun, I cross the room, glancing out at the glimmering strip of the San Francisco Bay and, just beyond it, the hazy outline of the Golden Gate. Four years on the West Coast and this view of water and sky still thrills me.

I pick up the phone, annoyed with myself for answering it, sure it’s someone calling to either sell me something or beg something from me.

“Oh, there you are! Have I caught you at a bad time?” It’s my mother. Her voice sounds cheerful and a little excited, as if she has good news. “I was just looking at my calendar and wondering if you could come to D.C. the first weekend of February.”

“I’m not sure. I’ll have to check. What’s up?” I drop onto the bed, heart beginning to clamor. I know what’s up.

“Well gosh, honey, I’ve been trying to find a good time to end things as you know, and I was hoping that weekend might work for you. I haven’t called your sisters yet, but of course I want them here too. And your girls if you can bring them. I’m still working out the details, but—”

“Jesus, Momma,” I hiss, cupping my hand over my mouth so Clara and Lane can’t hear me. “You make it sound like a family reunion!”

“Well, there’s no reason to get huffy, Zoe,” she says. “I can’t plan anything unless I know you girls are available. Can you just take a quick peek at your calendar?”

“No, I can’t! I’m in the middle of giving my kids a bath, I don’t have my calendar, and I can’t think about this right now.”

“Fine.” Her irritation is palpable and for a moment there is silence. “So when can you call me back?”

I want to say never. I will never call her back if she insists on talking about killing herself. But I think of her lying alone in her big empty bed, of her dying alone because her daughters weren’t willing to show up, and my petulance turns to shame.

“Okay, sweetie.” Her voice is cheerful again. “That would be great. Talk to you then!”

I stand up and look out the window, the sounds of splashing and laughter faint in the background, as if my daughters—or, for that matter, my entire life—had just receded into the distance. I watch the last burning rays of sunlight disappear behind Mount Tamalpais, the vast, glorious landscape slowly turning from gold to gray.

1. Imperfect Endings: A Daughter's Tale of Life and Death

2. Imperfect Endings: A Daughter's Tale of Life and Death

3. Imperfect Endings: A Daughter's Tale of Life and Death

4. Imperfect Endings: A Daughter's Tale of Life and Death

5. Imperfect Endings: A Daughter's Tale of Life and Death

6. Imperfect Endings: A Daughter's Tale of Life and Death