Items related to The Merchant of Venice (Folger Shakespeare Library) 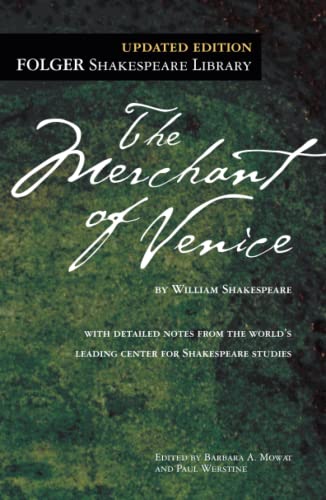 In The Merchant of Venice, the path to marriage is hazardous. To win Portia, Bassanio must pass a test prescribed by her father’s will, choosing correctly among three caskets or chests. If he fails, he may never marry at all.

Bassanio and Portia also face a magnificent villain, the moneylender Shylock. In creating Shylock, Shakespeare seems to have shared in a widespread prejudice against Jews. Shylock would have been regarded as a villain because he was a Jew. Yet he gives such powerful expression to his alienation due to the hatred around him that, in many productions, he emerges as the hero.

Portia is most remembered for her disguise as a lawyer, Balthazar, especially the speech in which she urges Shylock to show mercy that “droppeth as the gentle rain from heaven.”

The authoritative edition of The Merchant of Venice from The Folger Shakespeare Library, the trusted and widely used Shakespeare series for students and general readers, includes:

About the Author:
William Shakespeare was born in April 1564 in the town of Stratford-upon-Avon, on England’s Avon River. When he was eighteen, he married Anne Hathaway. The couple had three children—an older daughter Susanna and twins, Judith and Hamnet. Hamnet, Shakespeare’s only son, died in childhood. The bulk of Shakespeare’s working life was spent in the theater world of London, where he established himself professionally by the early 1590s. He enjoyed success not only as a playwright and poet, but also as an actor and shareholder in an acting company. Although some think that sometime between 1610 and 1613 Shakespeare retired from the theater and returned home to Stratford, where he died in 1616, others believe that he may have continued to work in London until close to his death.

The Merchant of Venice (Paperback or Softback)