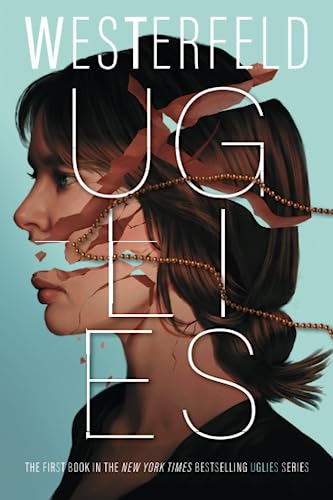 The Uglies series has more than 3 million books in print, has been translated into twenty-seven languages, and spent more than fifty weeks on the New York Times bestseller list. Now all four books feature fresh new covers and will reach an even wider audience. Tally’s adventures begin in Uglies, where she learns the truth about what life as a Pretty really means.

Playing on every teen’s passionate desire to look as good as everybody else, Scott Westerfeld (Midnighters) projects a future world in which a compulsory operation at sixteen wipes out physical differences and makes everyone pretty by conforming to an ideal standard of beauty. The "New Pretties" are then free to play and party, while the younger "Uglies" look on enviously and spend the time before their own transformations in plotting mischievous tricks against their elders. Tally Youngblood is one of the most daring of the Uglies, and her imaginative tricks have gotten her in trouble with the menacing department of Special Circumstances. She has yearned to be pretty, but since her best friend Shay ran away to the rumored rebel settlement of recalcitrant Uglies called The Smoke, Tally has been troubled. The authorities give her an impossible choice: either she follows Shay’s cryptic directions to The Smoke with the purpose of betraying the rebels, or she will never be allowed to become pretty. Hoping to rescue Shay, Tally sets off on the dangerous journey as a spy. But after finally reaching The Smoke she has a change of heart when her new lover David reveals to her the sinister secret behind becoming pretty. The fast-moving story is enlivened by many action sequences in the style of videogames, using intriguing inventions like hoverboards that use the rider’s skateboard skills to skim through the air, and bungee jackets that make wild downward plunges survivable -- and fun. Behind all the commotion is the disturbing vision of our own society -- the Rusties -- visible only in rusting ruins after a virus destroyed all petroleum. Teens will be entranced, and the cliffhanger ending will leave them gasping for the sequel. (Ages 12 and up) --Patty Campbell

Scott Westerfeld is the author of the Leviathan series, the first book of which was the winner of the 2010 Locus Award for Best Young Adult Fiction. His other novels include the New York Times bestseller Afterworlds, the worldwide bestselling Uglies series, The Last Days, Peeps, So Yesterday, and the Midnighters trilogy. Visit him at ScottWesterfeld.com or follow him on Twitter at @ScottWesterfeld.