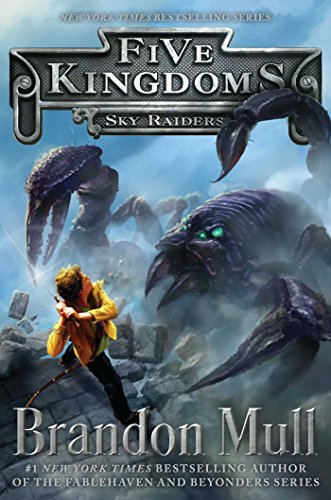 Adventure awaits in the Five Kingdoms—come and claim it in this start to a new series from the #1 New York Times bestselling author of the Fablehaven and Beyonders series.

Cole Randolph was just trying to have a fun time with his friends on Halloween (and maybe get to know Jenna Hunt a little better). But when a spooky haunted house turns out to be a portal to something much creepier, Cole finds himself on an adventure on a whole different level.

After Cole sees his friends whisked away to some mysterious place underneath the haunted house, he dives in after them—and ends up in The Outskirts.

The Outskirts are made up of five kingdoms that lie between wakefulness and dreaming, reality and imagination, life and death. It’s an in-between place. Some people are born there. Some find their way there from our world, or from other worlds.

And once you come to the Outskirts, it’s very hard to leave.

With the magic of the Outskirts starting to unravel, it’s up to Cole and an unusual girl named Mira to rescue his friends, set things right in the Outskirts, and hopefully find his way back home...before his existence is forgotten.

Paolini: What inspired you to write Five Kingdoms: Sky Raiders?

Mull: It’s hard for me to pinpoint where my stories come from. I get bored easily so I make up crazy stuff to cope with reality. Some of that stuff is useless, but some takes shape and becomes fun to revisit. I knew my sister-in-law Liz wanted a story with sky castles, so floating castles were one of the first ingredients I threw into the stew. I may not be able to detail the origin of Five Kingdoms, but I can explain what I was aiming to accomplish.

With Five Kingdoms, I wanted to bring together much of what I do best as a writer into one place. I wanted to merge some of the fun I put into Candy Shop War, with the discovery and adventure from Fablehaven, with some of the big world-building like I did in Beyonders. I wanted to create a world that opened up story possibilities I haven’t seen before.

The result is the Outskirts, where five different kingdoms are each governed by different types of magic. Some characters from our world get drawn into a fast-paced adventure that is sometimes scary and often strange but hopefully never boring.

Paolini: We’ve spoken before about your love of doorways, portals, and other such openings that transport you to strange and different places. That idea seems especially prominent in Sky Raiders. Is it something you thought about consciously when you were writing, or did it arise naturally from your interest in the subject?

Mull: Since my childhood, I’ve loved the idea of characters being transported to another world through a wardrobe, down a rabbit hole, over the rainbow, etc. As a kid, after reading the Narnia series, I sincerely wished for something like that to happen to me. I wanted to be king of some world and kill all the monsters and ride on lions and save everybody. When that didn’t pan out, I visited other worlds in my imagination instead.

With Five Kingdoms, I’m deliberately creating my most elaborate and varied world so far, and exploring it through the eyes of a character from our reality. Since each of the Five Kingdoms has different kinds of magic that work there, by the end of the series, readers essentially get to visit five new fantasy worlds in one.

Paolini: Many of your books feature characters who are siblings—specifically brother/sister—or who feel like siblings. In this case it’s Cole and Mira. Having a sister myself, I think you do a great job of portraying that sort of relationship. What is it, that you enjoy most about those kinds of characters?

Brother and sister relationships are complicated and interesting. They help ground characters and bring them to life in ways that many readers can identify with. I enjoy trying to capture the blend of silly banter, heated arguments, and real love and protectiveness that I remember from my own family relationships.

Paolini: It seems like you put a lot of thought into how the economy of the Five Kingdoms works. The sky raiders are scroungers, eking out a living on the edges of a very strange world. Much more interesting than just reading about kings and queens. How did you go about developing the economy and the society?

Mull: Some people think of fantasy as nonsense where anything can happen, but I’ve never seen it that way. To me, good fantasy doesn’t abandon reality. Instead, it creates a functional reality with different rules than our own. If my fantasy worlds make sense and feel authentic, the reader will have an easier time getting involved and caring about the story.

Part of the task involves figuring out the logistics of how the world works. Who governs it? How do they maintain control? Who supports them? Who dislikes them? Given the reality I have established, I try to think through how the fantasy/magical elements in the story would affect day-to-day life. I especially try to think how people would exploit different magical abilities or artifacts for gain.

Paolini: The magic in Five Kingdoms is really cool! I’d love to know more about why you chose this particular kind of magic and what its particular advantages/disadvantages are.

Mull: Each kingdom in Five Kingdoms has a different type of magic. Those in Sambria with magical talent can reshape reality as they desire. Only the most gifted can change reality in big ways and create beings called semblances that seem alive. Powerful shapers risk losing control and either becoming trapped in a nightmare of their own making or flat out destroying themselves and everything around them.

That type of magic seemed cool and dangerous, and gave an excuse for me to take readers to some very unusual settings. I had to be careful not to let the magic feel too powerful, so I made it very dangerous to tamper with living things, I made the magic work better in certain geographic locations than others, and I didn’t let any practitioners be flawless experts.

Paolini: Have you plotted out the series from start to finish? If so, how much does the outline change as you write?

Mull: I tend to daydream about my stories until I see them like movies in my mind. Then I convert that daydreamed adventure into written scenes. So I have a pretty firm blueprint at the start, but it evolves as I make discoveries along the way.

With Five Kingdoms, I know the kingdoms we’ll be visiting, and the main events that will happen. Many details will be added as I go.

Paolini: Who is your favorite character and why?

Mull: So hard to pick! I like Cole because he really cares about his friends and takes responsibility for them accidentally getting taken to the Outskirts as slaves. I think he is funny and grounded and tries hard to do the right thing.

Paolini: If you had to choose one magical item to use when raiding along with the sky raiders, which one would you choose?

Mull: Of the items in the book, I’d want Jace’s golden rope. It was an item that he claimed when scouting out a sky castle. The rope can get longer and shorter as needed. It responds to the will of the wielder, so it can reach out and tangle an enemy, wrap around a distant object, coil and spring the wielder forward, or curl up to cushion a fall. The golden rope’s extreme versatility would increase my chances of surviving a dangerous sky castle raid.

Brandon Mull is the author of the New York Times, USA TODAY, and Wall Street Journal bestselling Beyonders and Fablehaven series, as well as the bestselling Five Kingdoms, Candy Shop Wars, and Dragonwatch series. He resides in Utah, in a happy little valley near the mouth of a canyon with his wife and four children. Brandon’s greatest regret is that he has but one life to give for Gondor.