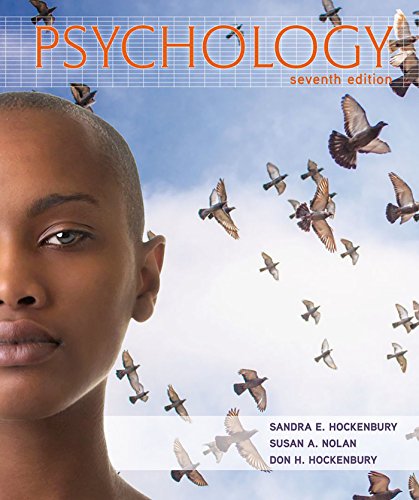 This acclaimed classroom favorite makes the science of psychology (and through that, the process of science itself) come alive for students, with personal stories that exemplify important concepts in a student-friendly way, and with coverage of the field’s scientific foundations and advances that is accessible without being oversimplified.

The substantially updated new edition extends the book’s focus on developing scientific literacy in the context of psychology, with new features in print and in the book’s new online course space, LaunchPad. These features are the result of the book’s most dramatic addition—Sandra Hockenbury’s new writing partnership with co-author, Susan Nolan, who shares her belief that the introductory course can help all kinds of students develop a real understanding of psychology and lasting scientific literacy without sacrificing the field’s research core.

Sandra E. Hockenbury is a science writer who specializes in psychology. Sandy received her B.A. from Shimer College and her M.A. from the University of Chicago, where she was also a research associate at the Institute of Social and Behavioral Pathology. Prior to co-authoring Psychology and Discovering Psychology, Sandy worked for several years as a psychology editor in both academic and college textbook publishing. Sandy has also taught as an adjunct faculty member at Tulsa Community College.

Sandy’s areas of interest include positive psychology, cross-cultural psychology, and the intersection of Buddhist philosophy, neuroscience, and psychology. She is a member of the American Psychological Association (APA), the Association of Psychological Science (APS), and the American Association for the Advancement of Science (AAAS). Sandy is a member of the Board of Trustees of Shimer College and recently served as a volunteer with Nomads Clinic, a nonprofit organization that brings medical care to remote areas in the Himalayan regions of Nepal and the Tibetan Plateau.

Don and Sandy’s daughter, Laura, is a college senior and geology major who, like her parents, has wide-ranging interests, including climate change, sustainable development, psychology, and the arts. A classical and improvisational pianist, co-director of her college comedy sketch group, and enthusiastic member of the 2011 Division III Ultimate college women’s championship team, Laura has recently taken up the mandolin.

Susan Nolan turned to psychology after suffering a career-ending accident on her second workday as a bicycle messenger. A native of Boston, she graduated from the College of the Holy Cross and earned her Ph.D. in clinical psychology from Northwestern University. Her research involves experimental investigations of the role of gender in the interpersonal consequences of depression and studies of gender and mentoring in science and technology, funded in part by the National Science Foundation. Susan is the Associate Dean of Graduate Studies for the College of Arts and Sciences, as well as an Associate Professor of Psychology, at Seton Hall University in New Jersey. She has served as a statistical consultant to researchers at several universities, medical schools, corporations, and nongovernmental organizations. Recently, she advised Bosnian high school students conducting public opinion research. Susan's academic schedule allows her to pursue one travel adventure per year, a tradition that she relishes. In recent years she rode her bicycle across the U.S. (despite her earlier crash), swapped apartments to live in Montreal, and explored the Adriatic coast in an intermittently roadworthy 1985 Volkswagen Scirocco. She wrote much of this book while spending a sabbatical year in rural Bosnia-Herzegovina, where her husband, Ivan Bojanic, worked as an advisor to regional governments. Susan and Ivan fell in love with Bosnia – a beautiful country – and bought a small house in the city of Banja Luka as a base for future adventures. They currently reside in New York City, where Susan roots feverishly, if quietly, for the Red Sox.

Don H. Hockenbury is Associate Professor of Psychology at Tulsa Community College, where he has had the privilege of teaching undergraduates for more than 30 years. Although he enjoys the unique challenges of teaching online, the classroom remains Don’s favorite forum for teaching students about the science and personal relevance of psychology. He is a recipient of the Tulsa Community College Award for Teaching Excellence. Don’s educational background includes a B.S. in psychology and an M.A. in clinical psychology, both from the University of Tulsa. Before he began his teaching career, he worked in psychiatric facilities and in private practice.