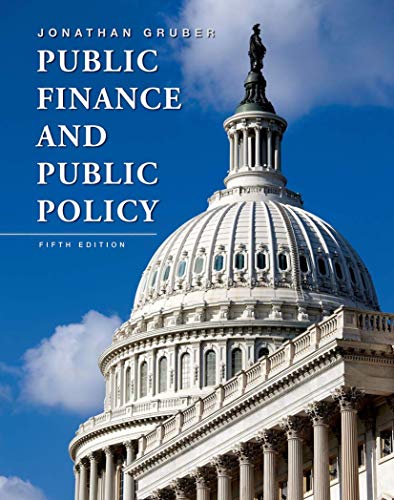 Get to know how public policy is created, implemented, and researched through the inclusion of real-world examples among traditional topics in public finance with Public Finance and Public Policy.

Dr. Jonathan Gruber is a Professor of Economics at the Massachusetts Institute of Technology, where he has taught since 1992. He is also the Director of the Health Care Program at the National Bureau of Economics Research, where he is a research Associate. He is a co-editor of the Journal of Public Economics and an Associate Editor of the Journal of Health Economics. Dr. Gruber received his B.S. in Economics from MIT and his PH.D. in Economics from Harvard. He has received and Alfred P. Sloan Foundation Research Fellowship, a FIRST award from the National Institute on Aging, and the Kenneth Arrow Award for the Best Paper in Health Economics in 1994. He was also one of the 15 scientists nationwide to receive the Presidential Faculty Fellow Award from the National Science Foundation in 1995. Dr. Gruber was elected to the Institute of Medicine in 2005, and in 2006, he received the American Society of Health Economists Inaugural Medial for the best health economist in the nation ages 40 and under. Dr. Gruber s research focuses on the areas of public finance and health economics. He has published more than 125 research articles and has edited 6 research volumes.
During the 1997-1998 academic year, Dr. Gruber was on leave from MIT, serving as Deputy Assistant Secretary for Economic Policy at the U.S. Treasury Department. He was a key architect of Massachusetts ambitious health reform effort, and in 2006, he became an inaugural member of the Health Connector Board, the main implementing body for the effort. In that year, he was named the nineteenth-most powerful person in health care in the United States by Modern Healthcare Magazine. He acted as a consultant on several presidential campaigns and is considered by the Washington Post to be one of the most influential health care experts in America."