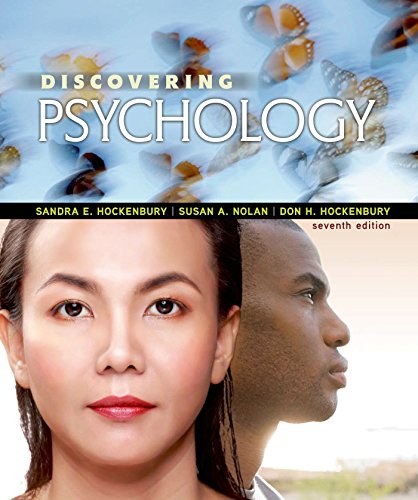 Using relatable personal stories to communicate the concepts of psychological science, Discovering Psychology presents important research in a clearly to help you develop a real understanding of psychology and lasting scientific literacy.

Sandra E. Hockenbury is a science writer who specializes in psychology. Sandy received her B.A. from Shimer College and her M.A. from the University of Chicago, where she was also a research associate at the Institute of Social and Behavioral Pathology. Prior to co-authoring Psychology and Discovering Psychology, Sandy worked for several years as a psychology editor in both academic and college textbook publishing. Sandy has also taught as an adjunct faculty member at Tulsa Community College.
Sandy s areas of interest include positive psychology, cross-cultural psychology, and the intersection of Buddhist philosophy, neuroscience, and psychology. She is a member of the American Psychological Association (APA), the Association of Psychological Science (APS), and the American Association for the Advancement of Science (AAAS). Sandy is a member of the Board of Trustees of Shimer College and recently served as a volunteer with Nomads Clinic, a nonprofit organization that brings medical care to remote areas in the Himalayan regions of Nepal and the Tibetan Plateau.
Don and Sandy s daughter, Laura, is a college senior and geology major who, like her parents, has wide-ranging interests, including climate change, sustainable development, psychology, and the arts. A classical and improvisational pianist, co-director of her college comedy sketch group, and enthusiastic member of the 2011 Division III Ultimate college women s championship team, Laura has recently taken up the mandolin.

Susan A. Nolan is Professor of Psychology at Seton Hall University in New Jersey. A graduate of the College of the Holy Cross, she earned her Ph.D. in psychology from Northwestern University. Susan researches interpersonal consequences of mental illness and the role of gender in science and technology fields. Her research has been funded by the National Science Foundation. Susan served as a nongovernmental representative from the American Psychological Association (APA) to the United Nations for five years, and is Vice President for Diversity and International Relations of the Society for the Teaching of Psychology. She is the 2014 2015 President of the Eastern Psychological Association (EPA), and is a Fellow of both EPA and APA.

Don H. Hockenbury is Associate Professor of Psychology at Tulsa Community College, where he has had the privilege of teaching undergraduates for more than 30 years. Although he enjoys the unique challenges of teaching online, the classroom remains Don s favorite forum for teaching students about the science and personal relevance of psychology. He is a recipient of the Tulsa Community College Award for Teaching Excellence. Don s educational background includes a B.S. in psychology and an M.A. in clinical psychology, both from the University of Tulsa. Before he began his teaching career, he worked in psychiatric facilities and in private practice.
Don s favorite research interests include the scientific study of sleep and dreaming, biopsychology, memory, psychological disorders, and the history of psychology. Don belongs to several professional organizations, including the Association of Psychological Science (APS), the American Psychological Association (APA), the American Academy of Sleep Medicine (AASM), and the Sleep Research Society (SRS)."

Shipping: US$ 55.36
From United Kingdom to U.S.A.
Destination, rates & speeds