Items related to The Invention of Wings

The Invention of Wings 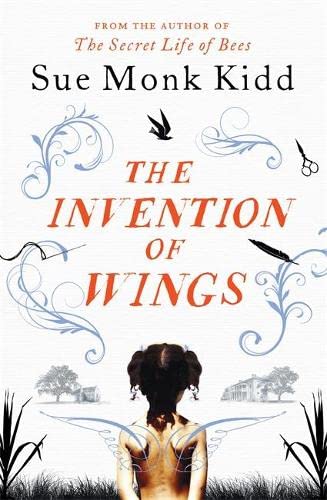 The No. 1 New York Times bestseller. THE INVENTION OF WINGS by Sue Monk Kidd was selected as an Oprah Book Club 2.0 pick on December 10, 2013. From the celebrated author of the international bestseller The Secret Life of Bees comes an extraordinary novel about two exceptional women. Sarah Grimke is the middle daughter. The one her mother calls difficult and her father calls remarkable. On Sarah's eleventh birthday, Hetty 'Handful' Grimke is taken from the slave quarters she shares with her mother, wrapped in lavender ribbons, and presented to Sarah as a gift. Sarah knows what she does next will unleash a world of trouble. She also knows that she cannot accept. And so, indeed, the trouble begins ... A powerful, sweeping novel, inspired by real events, and set in the American Deep South in the nineteenth century, THE INVENTION OF WINGS evokes a world of shocking contrasts, of beauty and ugliness, of righteous people living daily with cruelty they fail to recognise; and celebrates the power of friendship and sisterhood against all the odds.

In the early 1830s, Sarah Grimké and her younger sister, Angelina, were the most infamous women in America. They had rebelled so vocally against their family, society, and their religion that they were reviled, pursued, and exiled from their home city of Charleston, South Carolina, under threat of death. Their crime was speaking out in favor of liberty and equality and for African American slaves and women, arguments too radically humanist even for the abolitionists of their time. Their lectures drew crowds of thousands, even (shockingly, then) men, and their most popular pamphlet directly inspired Harriet Beecher Stowe’s Uncle Tom's Cabin--published 15 years later. These women took many of the first brutal backlashes against feminists and abolitionists, but even their names are barely known now. Sue Monk Kidd became fascinated by these sisters, and the question of what compelled them to risk certain fury and say with the full force of their convictions what others had not (or could not). She discovered that in 1803, when Sarah turned 11, her parents gave her the “human present” of 10-year-old Hetty to be her handmaid, and Sarah taught Hetty to read, an act of rebellion met with punishment so severe that the slave girl died of "an unspecified disease" shortly after her beating. Kidd knew then that she had to try to bring Hetty back to life (“I would imagine what might have been," she tells us), and she starts these girls' stories here, both cast in roles they despise. She trades chapters between their voices across decades, imagining the Grimké sisters’ courageous metamorphosis and, perhaps more vitally, she gives Hetty her own life of struggle and transformation. Few characters have ever been so alive to me as Hetty and Sarah. Long after you finish this book, you'll feel its courageous heart beating inside your own. -- Mari Malcolm

Sue Monk Kidd is the author of three novels, all of which have been international bestsellers: The Secret Life Of Bees, The Mermaid Chair and The Invention Of Wings. The Secret Life Of Bees spent two years on the New York Times bestseller list, was long-listed for the Orange Prize, and was turned into an award-winning film. The Mermaid Chair and The Invention of Wings were both No. 1 New York Times bestsellers. Sue is also the author of several acclaimed non-fiction books including Travelling with Pomegranates, which she co-wrote with her daughter Ann Kidd Taylor. Sue lives in Florida with her husband Sandy. www.suemonkkidd.com Twitter @suemonkkidd

1. The Invention of Wings

2. The Invention of Wings

Book Description Tinder Press. Condition: Acceptable. May have some shelf-wear due to normal use. Seller Inventory # 0KVOV9000DUC

3. The Invention of Wings

Book Description Headline Publishing Group, 2014. Condition: Good. Ships from the UK. Former Library book. Shows some signs of wear, and may have some markings on the inside. Seller Inventory # GRP77146036

4. The Invention of Wings

5. The Invention of Wings

6. The Invention of Wings

Book Description Tinder Press. Hardcover. Condition: Good. Connecting readers with great books since 1972. Used books may not include companion materials, some shelf wear, may contain highlighting/notes, may not include cdrom or access codes. Customer service is our top priority!. Seller Inventory # S_305823432

7. The Invention of Wings

Book Description Tinder Press, 2014. Condition: Fair. This is an ex-library book and may have the usual library/used-book markings inside.This book has hardback covers. In fair condition, suitable as a study copy. Dust Jacket in fair condition. Please note the Image in this listing is a stock photo and may not match the covers of the actual item,750grams, ISBN:9781472212757. Seller Inventory # 9002931

8. The Invention of Wings

Book Description Tinder Press, 2014. Hardcover. Condition: Used; Good. **SHIPPED FROM UK** We believe you will be completely satisfied with our quick and reliable service. All orders are dispatched as swiftly as possible! Buy with confidence!. Seller Inventory # 1842831

9. The Invention of Wings

Book Description Tinder Press, 2014. Hardcover. Condition: Used; Good. **Simply Brit** Shipped with Premium postal service within 24 hours from the UK with impressive delivery time. We have dispatched from our book depository; items of good condition to over ten million satisfied customers worldwide. We are committed to providing you with reliable and efficient service at all times. Seller Inventory # 1335583

10. The Invention of Wings

Book Description Tinder Press, 2014. Hardcover. Condition: Used; Good. stains on the side. stains on some pages **SHIPPED FROM UK** We believe you will be completely satisfied with our quick and reliable service. All orders are dispatched as swiftly as possible! Buy with confidence!. Seller Inventory # 3798101