Items related to The Haunted Mansion: Imagineering a Disney Classic... 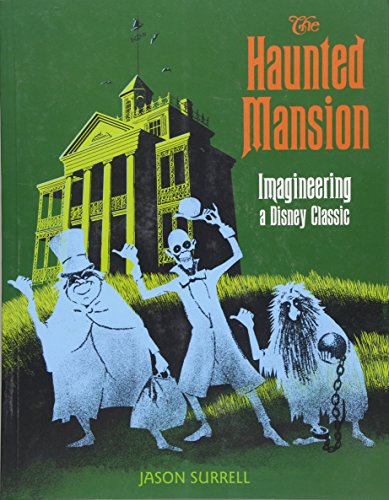 WELCOME, FOOLISH MORTALS, to the Haunted Mansion, one of the most popular attractions in the history of Disney theme parks. The Haunted Mansion: Imagineering a Disney Classic explores how the attraction's "999 happy haunts" were brought to life. Rare early concept sketches, detailed architectural drawings, and stunning still photography illustrate the Mansion's evolution as it was designed and built at each Magic Kingdom park around the world-including Mystic Manor at Hong Kong Disneyland.

Our tour begins here with a twistedly thorough third edition. Based on the retired title The Haunted Mansion: From the Magic Kingdom to the Movies, this newly updated volume confirms or debunks longstanding urban legends, shares fascinating behind-the-screams stories, and reveals how concepts move from inspiration to reality. Readers will discover the latest show enhancements to this classic attraction and find even more artwork depicting the happy haunting grounds in California and Florida as well as Tokyo, Paris, and now Hong Kong. This is one book you'll be dying to have on your shelf!

Jason Surrell is an author, screenwriter, creativedirector and former Senior Show Writer for Walt Disney Imagineering. Jason is also the author of The Art of The Haunted Mansion; Screenplay by Disney: Tips and Techniques toBring Magic to Your Moviemaking: Piratesof the Caribbean: From the Magic Kingdom to the Movies; The Disney Mountains: Imagineering at ItsPeak; The Art of Marvel's TheAvengers; and has contributed essays and feature articles to The Imagineering Way, The Imagineering Workout, The Disney Insider Yearbook and disney twenty-three magazine. He alsowrote for Walt Disney Television's internationally syndicated televisionseries, Secrets of the Animal Kingdom.Jason is currently a Creative Director at Universal Creative.

"The ride's beginnings date to the early to mid-1950s, first gaining major traction when Walt Disney assigned the project that would ultimately reside in the New Orleans Square section of Disneyland to Ken Anderson, an animator turned Imagineer. Anderson, says [Marty] Sklar, took the first known crack at a story. Anderson's treatments give the ride a much more disturbing core than its current incarnation. A Disney Editions book, The Haunted Mansion: Imagineering a Disney Classic, details Anderson's initial drafts."―Los Angeles Times

2. The Haunted Mansion: Imagineering a Disney Classic (From the Magic Kingdom)