Items related to The Other Einstein: A Novel

Benedict, Marie The Other Einstein: A Novel 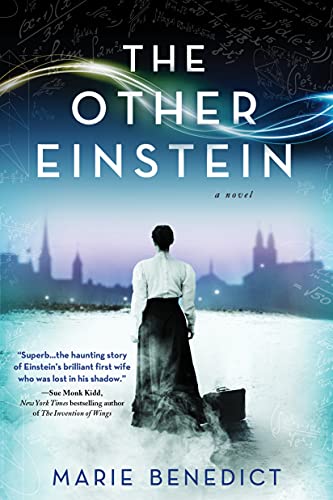 A marriage of geniuses: In a time when most twenty-year-old women were wives, or trying to be, Mileva Maric was studying physics at an elite university in Zurich. Her rise from the relative backwater of misogynistic Serbia to all-male university classrooms in Switzerland was nothing short of meteoric. Her male peers could only try to keep up with her clever calculations. For Mileva, math was an easier path than marriage. Then, fellow student Albert Einstein took an interest in her and the world turned sideways. Their life together was a partnership of heart and mind. But could there be room for more than one genius in a marriage?

The other Einstein: Mileva Maric was a fascinating, brilliant physicist in her own right. She was, in fact, the other Einstein. In the world of physics, there's much debate over the role she played in forming the theory of special relativity, one of her husband's greatest works. Was she simply a sounding board, computing the complex mathematical equations? Or did she contribute something more?

An overlooked woman of science: The Other Einstein is a novel in the spirit of The Paris Wife and Mrs. Poe. Marie Benedict brings to life the story of one of the most overlooked women of science. If you enjoyed I Was Anastasia and Beatriz Williams's books, you will love this captivating story.

Be sure to check out Marie Benedict's other books about spectacular women behind influential men: Carnegie's Maid and The Only Woman in the Room.

Marie Benedict is a lawyer with more than ten years' experience as a litigator at two of the country's premier law firms and for Fortune 500 companies.

"Beautifully written...a finely drawn portrait of a woman in love with the wrong man." - Jillian Cantor, author of Margot and The Hours Count

"In her compelling novel... Benedict makes a strong case that the brilliant woman behind [Albert Einstein] was integral to his success, and creates a rich historical portrait in the process." - Publishers Weekly

"Benedict's debut novel carefully traces Mileva's life-from studious schoolgirl to bereaved mother-with attention paid to the conflicts between personal goals and social conventions. An intriguing... reimagining of one of the strongest intellectual partnerships of the 19th century." - Kirkus

"Many will enjoy Benedict's feminist views and be fascinated by the life of an almost unknown woman." - RT Book Reviews, 4 Stars

"...INTIMATE and IMMERSIVE historical novel....Prepare to be moved by this provocative history of a woman whose experiences will resonate with today's readers." " - Library Journal, Editors' Fall Picks

"The Other Einstein takes you into Mileva's heart, mind, and study as she tries to forge a place for herself in a scientific world dominated by men. " - Bustle

"...an ENGAGING and THOUGHT PROVOKING fictional telling of the poignant story of an overshadowed woman scientist." - Booklist

"Superb...the haunting story of Einstein's brilliant first wife who was lost in his shadow.
" - Sue Monk Kidd, NYT bestselling author of The Invention of Wings, The Secret Life of Bees, and The Mermaid Chair

The Other Einstein: A Novel (Paperback)

Book Description Paperback. Condition: New. Reprint. Language: English. Brand new Book. From beloved New York Times and USA Today bestselling author Marie Benedict comes the story of a not-so-famous scientist who not only loved Albert Einstein, but also shaped the theories that brought him lasting renown.In the tradition of Beatriz Williams and Paula McClain, Marie Benedict's The Other Einstein offers us a window into a brilliant, fascinating woman whose light was lost in Einstein's enormous shadow. This novel resurrects Einstein's wife, a brilliant physicist in her own right, whose contribution to the special theory of relativity is hotly debated. Was she simply Einstein's sounding board, an assistant performing complex mathematical equations? Or did she contribute something more?Mitza Maric has always been a little different from other girls. Most twenty-year-olds are wives by now, not studying physics at an elite Zurich university with only male students trying to outdo her clever calculations. But Mitza is smart enough to know that, for her, math is an easier path than marriage. Then fellow student Albert Einstein takes an interest in her, and the world turns sideways. Theirs becomes a partnership of the mind and of the heart, but there might not be room for more than one genius in a marriage.Marie Benedict illuminates one pioneering woman in STEM, returning her to the forefront of history's most famous scientists."The Other Einstein takes you into Mileva's heart, mind, and study as she tries to forge a place for herself in a scientific world dominated by men."-BustleRecommended by PopSugar, Bustle, Booklist, Library Journal and more!Other Bestselling Historical Fiction from Marie Benedict:The Mystery of Mrs. ChristieThe Only Woman in the RoomLady ClementineCarnegie's Maid. Seller Inventory # CBL9781492647584