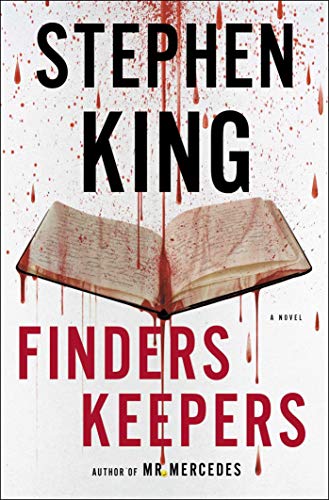 A masterful, intensely suspenseful novel about a reader whose obsession with a reclusive writer goes far too far—a book about the power of storytelling, starring the same trio of unlikely and winning heroes King introduced in Mr. Mercedes.

“Wake up, genius.” So begins King’s instantly riveting story about a vengeful reader. The genius is John Rothstein, an iconic author who created a famous character, Jimmy Gold, but who hasn’t published a book for decades. Morris Bellamy is livid, not just because Rothstein has stopped providing books, but because the nonconformist Jimmy Gold has sold out for a career in advertising. Morris kills Rothstein and empties his safe of cash, yes, but the real treasure is a trove of notebooks containing at least one more Gold novel.

Morris hides the money and the notebooks, and then he is locked away for another crime. Decades later, a boy named Pete Saubers finds the treasure, and now it is Pete and his family that Bill Hodges, Holly Gibney, and Jerome Robinson must rescue from the ever-more deranged and vengeful Morris when he’s released from prison after thirty-five years.

Not since Misery has King played with the notion of a reader whose obsession with a writer gets dangerous. Finders Keepers is spectacular, heart-pounding suspense, but it is also King writing about how literature shapes a life—for good, for bad, forever.

An Amazon Best Book of June 2015: For those of you who spent part of last summer being thrilled by Stephen King’s Mr. Mercedes, this worthy sequel arrives just in time for summer 2015. Of course you can read Finders Keepers on its own if you’re so-inclined—King takes time to introduce new characters and new crimes in the first half of the book before carting out some familiar faces from the past. The story begins with a murder (of an author) and a robbery (of the author’s notebooks, including at least one unpublished manuscript). The crimes will linger in your mind, but what might linger most is when King explores his obsessions with, well, obsessions: obsession with reading, obsession with writers, even the need to get revenge. The book is well-plotted, but there remains an organic feel to this series, like the characters are writing themselves to some extent. As a character in Finders Keepers puts it, “a good novelist does not create events, he watches them happen then writes down what he sees. A good novelist realizes he is a secretary, not God.” Amen. That's why we love you, Stephen King.--Chris Schluep

About the Author:
Stephen King is the author of more than sixty books, all of them worldwide bestsellers. His recent work includes The Institute, Elevation, The Outsider, Sleeping Beauties (cowritten with his son Owen King), and the Bill Hodges trilogy: End of Watch, Finders Keepers, and Mr. Mercedes (an Edgar Award winner for Best Novel and an AT&T Audience Network original television series). His novel 11/22/63 was named a top ten book of 2011 by The New York Times Book Review and won the Los Angeles Times Book Prize for Mystery/Thriller. His epic works The Dark Tower and It are the basis for major motion pictures, with It now the highest grossing horror film of all time. He is the recipient of the 2018 PEN America Literary Service Award, the 2014 National Medal of Arts, and the 2003 National Book Foundation Medal for Distinguished Contribution to American Letters. He lives in Bangor, Maine, with his wife, novelist Tabitha King.

Book Description Hardcover. Condition: New. Dust Jacket Condition: New. First Edition. New. Red pen mark on the bottom of the pages. Black boards with silver lettering on the red spine. The dust jacket has a closed tear ath the bottom edge of the back flap and is in new mylar. Size: 8vo - over 7ľ" - 9ľ" tall. Horror. Seller Inventory # 046909