Items related to Everyone Brave is Forgiven

Cleave, Chris Everyone Brave is Forgiven 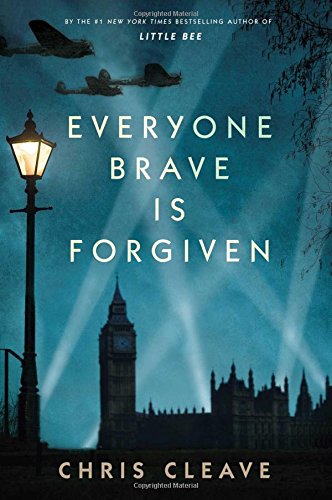 “Cleave’s foray into historical fiction is both grand and intimate. The novel’s ability to stay small and quiet against the raging tableau of war is what also makes it glorious....an absorbing account of survival, racism, classism, love, and pain, and the scars left by all of them...Cleave’s prose is imbued with a Dickensian flair, deploying brilliant metaphors and crackling dialogue.” —The New York Times Book Review

“With dazzling prose, sharp English wit, and compassion, Cleave paints a powerful portrait of war’s effects on those who fight and those left behind.” —People Book of the Week

“The London Blitz is cinematically re-imagined in a deeply moving new novel from Chris Cleave. As he did in Little Bee, he places forthright characters in impossible situations in Everyone Brave Is Forgiven, a story set during World War II.” —Carol Memmott, Star Tribune (Minneapolis)

“Real, engaging characters, based loosely on Cleave’s own grandparents, come alive on the page. Insightful, stark, and heartbreaking, Cleave’s latest novel portrays the irrepressible hopefulness that can arise in the face of catastrophe.” —Publishers Weekly (starred review)

“Among all the recent fictions about the war, Cleave’s miniseries of a novel is a surprising standout, with irresistibly engaging characters.” —Kirkus Reviews

“Beautifully written, funny, gut-wrenching, and, above all, honest.” —The Daily Mail (UK)

The day war is declared, Mary North leaves finishing school unfinished, goes straight to the War Office, and signs up.

Tom Shaw decides to ignore the war—until he learns his roommate Alistair Heath has unexpectedly enlisted. Then the conflict can no longer be avoided.

Young, bright, and brave, Mary is certain she’d be a marvelous spy. When she is—bewilderingly—made a teacher, she finds herself defying prejudice to protect the children her country would rather forget.

Tom, meanwhile, finds that he will do anything for Mary.

And when Mary and Alistair meet, it is love, as well as war, that will test them in ways they could not have imagined, entangling three lives in violence and passion, friendship and deception, inexorably shaping their hopes and dreams.

Set in London during the years of 1939–1942, when citizens had slim hope of survival, much less victory; and on the strategic island of Malta, which was daily devastated by the Axis barrage, Everyone Brave is Forgiven features little-known history and a perfect wartime love story inspired by the real-life love letters between Chris Cleave’s grandparents. This dazzling novel dares us to understand that, against the great theater of world events, it is the intimate losses, the small battles, the daily human triumphs that change us most.

An Amazon Best Book of May 2016: We’ve been wondering lately: What is the secret sauce that makes novels like Anthony Doerr’s All the Light We Cannot See and Kristin Hannah’s The Nightingale so popular, stories set against the backdrop of WWII? Whatever it is, it made me approach Chris Cleave’s Everyone Brave is Forgiven with a particularly wary eye. Sure, it’s got all of the ingredients—heroes and heroines who are flawed yet admirable. Check! A love story that manages to be poignant without being precious. Check! It even has cover art that is, as an astute colleague put it, a little cartoonish but appealingly “Disney-London.” If you’re a terrible cook like me, however, you know that you can have all of the right ingredients and still concoct something utterly inedible. But this couldn’t be farther from the case with ‘Brave,’ which was inspired by love letters that Cleave unearthed from his grandparents. The non-love story aspects of this novel are just as compelling, and add a layer of gravitas to a story that could easily slip into “sudsy” territory. These parts provide a chilling reminder that it wasn’t just the Jews who were marginalized and punished during WWII, but black children, poor children, and the otherwise “different” or disenfranchised. Moreover, through the character of Mary North, ‘Brave’ emphasizes the importance of challenging injustices. This timeless message is another key ingredient in what is sure to be another beloved (WWII) novel. --Erin Kodicek

Chris Cleave is the author of Everyone Brave is Forgiven, Gold, Incendiary, and the #1 New York Times bestseller Little Bee. He lives with his wife and three children in London, England. Visit him at ChrisCleave.com or on Twitter @ChrisCleave.

Everyone Brave is Forgiven Cleave, Chris