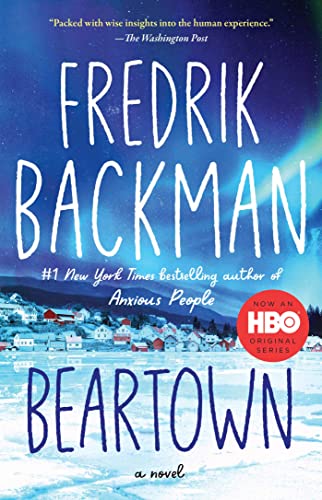 NAMED ONE OF THE BEST BOOKS OF THE YEAR BY: LibraryReads · BookBrowse · Goodreads

The bestselling author of A Man Called Ove returns with a dazzling, profound novel about a small town with a big dream—and the price required to make it come true.

People say Beartown is finished. A tiny community nestled deep in the forest, it is slowly losing ground to the ever-encroaching trees. But down by the lake stands an old ice rink, built generations ago by the working men who founded this town. And in that ice rink is the reason people in Beartown believe tomorrow will be better than today. Their junior ice hockey team is about to compete in the national semi-finals, and they actually have a shot at winning. All the hopes and dreams of this place now rest on the shoulders of a handful of teenage boys.

Being responsible for the hopes of an entire town is a heavy burden, and the semi-final match is the catalyst for a violent act that will leave a young girl traumatized and a town in turmoil. Accusations are made and, like ripples on a pond, they travel through all of Beartown, leaving no resident unaffected.

Beartown explores the hopes that bring a small community together, the secrets that tear it apart, and the courage it takes for an individual to go against the grain. In this story of a small forest town, Fredrik Backman has found the entire world.

An Amazon Best Book of April 2017: How do I love Beartown? Let me count the ways. It’s a domestic drama in which a family is pulled apart by an act of violence. It’s a coming-of-age story for a young woman who must choose to speak out or keep silent. (And a young man, too, actually.) It’s a slow-build thriller, opening the story with the statement that one teenager is going to put a shotgun to the head of another and pull the trigger. It’s a cautionary tale of small-town thinking...yet at the same time celebrates how a handful of people can change a tight-knit community. Beartown has so much going on within its enjoyably readable pages that putting it in a literary box is all but impossible—and indeed that is one of the many reasons readers will pass this book amongst one another with a confident “I think you’ll like this.” As the town’s finances decline, small, scrappy Beartown hunkers deeper into itself, proud only of its white-hot junior hockey team led by a coach whose hard-driving mantra is, simply, “Win.” Seizing the upcoming hockey championship could lure a new hockey academy their way and jumpstart the local economy. But the exposure of a hidden crime sweeps the hockey club into its vortex and fractures the town and longtime friendships, even as it welds together new, unlikely alliances. Once the crime is revealed, Beartown could have strolled down an easy trail, but Backman refuses to tread it, sidestepping the predictable as he forges a new path of soul-searching and truth-telling. There are hard moments here, and readers might find difficult discoveries in their own hearts as the people of Beartown struggle with what they hope is real but fear is not. Masterful in its storytelling and honesty, this is another winner for Backman, surpassing even his much-lauded A Man Called Ove. —Adrian Liang, The Amazon Book Review

Fredrik Backman is the #1 New York Times bestselling author of A Man Called Ove (soon to be a major motion picture starring Tom Hanks), My Grandmother Asked Me to Tell You She’s Sorry, Britt-Marie Was Here, Beartown, Us Against You, as well as two novellas, And Every Morning the Way Home Gets Longer and Longer and The Deal of a Lifetime. His books are published in more than forty countries. He lives in Stockholm, Sweden, with his wife and two children. Connect with him on Twitter @BackmanLand or on Instagram @backmansk.