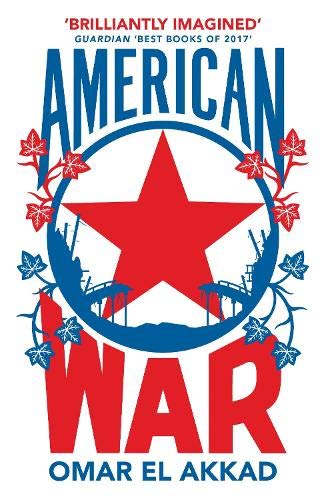 An Amazon Best Book of April 2017: American War will give you chills. Set in in 2075, Omar El Akkad's debut presents a fractured and frightening America, where the sun burns hot and the country has turned into war zones and refugee camps. Over the course of two decades, Akkad traces the fate of the Chestnut family, who flee their home in the south and spend the better part of their lives in a sprawling, impoverished encampment. This is where Sarat, a young, brave, tomboy, comes of age: “Perhaps the longing for safety was itself just another kind of violence—a violence of cowardice, silence, submission. What was safety, anyway, but the sound of a bomb falling on someone else’s home?” Albert Gaines, a radicalized Southerner, takes Sarat under his wing, equipping her with the fervor and tactics needed to win the war. Akkad piercingly describes the ravaged towns, the gel packets of fruit rations, the torturous effects of growing up in war. Written with precise care for the fictional truth—news articles, press releases, and oral histories emerge throughout – the book sounds a warning blast. American War is a disquieting novel of immense depth, and possibly a classic of our time. --Al Woodworth, The Amazon Book Review

Omar El Akkad is an award-winning journalist and author who has travelled around the world to cover many of the most important news stories of the last decade. His reporting includes dispatches from the NATO-led war in Afghanistan, the military trials at Guantanamo Bay, the Arab Spring revolution in Egypt and the Black Lives Matter movement in Ferguson, Missouri. He is a recipient of a National Newspaper Award for investigative reporting and the Goff Penny Memorial Prize for Young Journalists, as well as three National Magazine Award honorable mentions. He lives in Portland, Oregon.

Book Description Condition: Very Good. Ships from the UK. Former library book; may include library markings. Used book that is in excellent condition. May show signs of wear or have minor defects. Seller Inventory # 18918389-20

Book Description Paperback. Sarat Chestnut, born in Louisiana, is only six when the Second American Civil War breaks out in 2074. But even she knows that oil is outlawed, that Louisiana is half underwater, that unmanned drones fill the sky. And when her father is killed and her family is forced into Camp Patience for displaced persons, she quickly begins to be shaped by her particular time and place until, finally, through the influence of a mysterious functionary, she is turned into a deadly instrument of war. Telling her story is her nephew, Benjamin Chestnut, born during war - part of the Miraculous Generation - now an old man confronting the dark secret of his past, his family's role in the conflict and, in particular, that of his aunt, a woman who saved his life while destroying untold others. Seller Inventory # 8931898