Items related to Option B: Facing Adversity, Building Resilience, and... 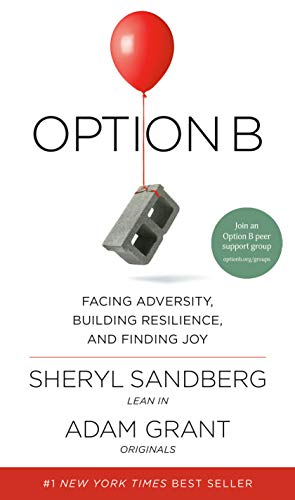 From Facebook’s COO and Wharton’s top-rated professor, the #1 New York Times best-selling authors of Lean In and Originals: a powerful, inspiring, and practical book about building resilience and moving forward after life’s inevitable setbacks.

After the sudden death of her husband, Sheryl Sandberg felt certain that she and her children would never feel pure joy again. “I was in ‘the void,’” she writes, “a vast emptiness that fills your heart and lungs and restricts your ability to think or even breathe.” Her friend Adam Grant, a psychologist at Wharton, told her there are concrete steps people can take to recover and rebound from life-shattering experiences. We are not born with a fixed amount of resilience. It is a muscle that everyone can build.
Option B combines Sheryl’s personal insights with Adam’s eye-opening research on finding strength in the face of adversity. Beginning with the gut-wrenching moment when she finds her husband, Dave Goldberg, collapsed on a gym floor, Sheryl opens up her heart—and her journal—to describe the acute grief and isolation she felt in the wake of his death. But Option B goes beyond Sheryl’s loss to explore how a broad range of people have overcome hardships including illness, job loss, sexual assault, natural disasters, and the violence of war. Their stories reveal the capacity of the human spirit to persevere . . . and to rediscover joy.
Resilience comes from deep within us and from support outside us. Even after the most devastating events, it is possible to grow by finding deeper meaning and gaining greater appreciation in our lives. Option B illuminates how to help others in crisis, develop compassion for ourselves, raise strong children, and create resilient families, communities, and workplaces. Many of these lessons can be applied to everyday struggles, allowing us to brave whatever lies ahead. Two weeks after losing her husband, Sheryl was preparing for a father-child activity. “I want Dave,” she cried. Her friend replied, “Option A is not available,” and then promised to help her make the most of Option B.
We all live some form of Option B. This book will help us all make the most of it.

Review:
An Amazon Best Book of April 2017: After the unexpected passing of her beloved husband, Facebook COO and bestselling author of Lean In, Sheryl Sandberg, feared that she and her children would never find joy again. Fortunately this fear was unfounded. Option B: Facing Adversity, Building Resilience, and Finding Joy--co-authored with psychologist and friend Adam Grant--shows you how Sandberg, and many others who have overcome a wide range of profound hardships, triumphed over tragedy. The book posits that it’s helpful to think of resilience like a muscle, one that atrophies in the calm between the storms of our lives. But there are things we can do to develop it, so we’re better prepared when adversity strikes. In America, culture can put a kink in this plan. Processing a painful event can be hindered when you’re wired not to talk about it. We all know that when someone asks how we’re doing, the expected response is “fine,” no matter if we’ve just lost a limb, or had a cancer scare. We will grin, and we will bear it, and we will go back to work too soon and burst into tears in the copy room when confronted by a malevolent stapler (or maybe that’s just me). Recently, Sandberg helped to enact a new employee benefit at Facebook: 20 days of paid bereavement leave, twice the amount that was offered previously. As she explains in Option B, it’s the humane thing to do, and it also makes good business sense; compassionate companies engender more loyal employees. In this way, Option B is more than a little revolutionary. It challenges us to change systems that don’t always take our humanness into account. And that’s something we need to do on a personal level as well. None of us are immune to misfortune and heartbreak. We need to cut ourselves some slack when times get tough, and, as Sandberg discovered, flip the golden rule: When a loved one is in distress, instead of treating them how you would want to be treated, consider how they want to be treated, which may be quite different. Option B starts an (oftentimes) uncomfortable but important conversation. If we lean in to the numerous lessons it has on offer, there’s a lot more joy to be found. --Erin Kodicek, The Amazon Book Review
About the Author:
SHERYL SANDBERG is chief operating officer at Facebook, overseeing the firm's business operations. Prior to Facebook, Sheryl was vice president of Global Online Sales and Operations at Google, chief of staff for the United States Treasury Department under President Clinton, a management consultant with McKinsey & Company, and an economist with the World Bank.

Sheryl is the co-author of Option B: Facing Adversity, Building Resilience, and Finding Joy with Wharton professor and bestselling author Adam Grant, which will be released April 24, 2017. She is also the author of the bestsellers Lean In: Women, Work, and the Will to Lead and Lean In for Graduates. She is the founder of the Sheryl Sandberg & Dave Goldberg Family Foundation, a nonprofit organization that works to build a more equal and resilient world through two key initiatives, LeanIn.Org and OptionB.Org (launching April 2017). Sheryl serves on the boards of Facebook, the Walt Disney Company, Women for Women International, ONE, and SurveyMonkey.


ADAM GRANT is a psychologist and the New York Times best-selling author of Originals and Give and Take. His new book, Option B with Facebook COO and Lean In author Sheryl Sandberg, debuts April 24, 2017.

As Wharton’s top-rated professor for five straight years, Adam is a leading expert on how we can find motivation and meaning, and live more generous and creative lives. He has been recognized as one of the world’s 25 most influential management thinkers and received distinguished scholarly achievement awards from the American Psychological Association and the National Science Foundation.

Adam received his B.A. from Harvard University with Phi Beta Kappa honors and his Ph.D. from the University of Michigan. He serves as a contributing op-ed writer for The New York Times on work and psychology. His keynote speaking and consulting clients include Facebook and Google, the NBA, Teach For America, and the U.S. Army and Navy.

Adam is a former Junior Olympic springboard diver. He lives in Philadelphia with his wife, their two daughters, and their son.