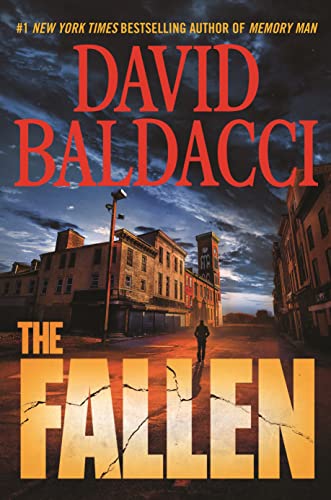 Star FBI detective Amos Decker and his colleague Alex Jamison must solve four increasingly bizarre murders in a dying rust belt town--and the closer they come to the truth, the deadlier it gets in this rapid-fire #1 New York Times bestseller.

Something sinister is going on in Baronville. The rust belt town has seen four bizarre murders in the space of two weeks. Cryptic clues left at the scenes--obscure bible verses, odd symbols--have the police stumped.

Amos Decker and his FBI colleague Alex Jamison are in Baronville visiting Alex's sister and her family. It's a bleak place: a former mill and mining town with a crumbling economy and rampant opioid addiction. Decker has only been there a few hours when he stumbles on a horrific double murder scene.

Then the next killing hits sickeningly close to home. And with the lives of people he cares about suddenly hanging in the balance, Decker begins to realize that the recent string of deaths may be only one small piece of a much larger scheme--with consequences that will reach far beyond Baronville.

Decker, with his singular talents, may be the only one who can crack this bizarre case. Only this time--when one mistake could cost him everything--Decker finds that his previously infallible memory may not be so trustworthy after all...

About the Author:
David Baldacci is a global #1 bestselling author, and one of the world's favorite storytellers. His books are published in over 45 languages and in more than 80 countries, with over 130 million worldwide sales. His works have been adapted for both feature film and television. David Baldacci is also the cofounder, along with his wife, of the Wish You Well Foundation, a nonprofit organization dedicated to supporting literacy efforts across America. Still a resident of his native Virginia, he invites you to visit him at DavidBaldacci.com and his foundation at WishYouWellFoundation.org.
Review:
"Baldacci is a wonderful storyteller, and he incorporates wonderful characters into baffling conspiracies. ...he takes on small-town America, capturing both good and bad elements. He demonstrates why these small towns are worth saving. It's a theme he has explored before, but it still has potency and relevance."―Associated Press


"The pace picks up considerably with each passing chapter until the inevitable ending that most surely will deliver a resolution at about the same time you are catching your breath."―BookReporter.com

"Amos Decker novels just keep getting better and better, and it's partly due to the careful in-depth characterization Baldacci gives his main character."―New York Journal of Books

Book Description Hardcover. Condition: New. First Printing. Excellent condition. Interior is tight, bright and clean; no underlining, notes or highlighting. Hard covers are tight and stiff. Complete with original and sticker free paper dust cover. 100% Satisfaction Guaranteed. All items are carefully enclosed with bubble wrap. We ship promptly and worldwide via US Post and will email you a tracking number. Seller Inventory # SKU0065734