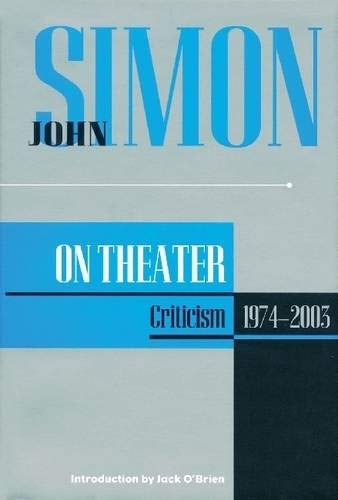 This provocative collection and major publishing event brings together the critical highlights of the well-known New York cultural critic John Simon. Covering a span of more than three decades, it includes previously published work from New York, the Hudson Review, National Review, Opera News, the New Leader, and other notable publications.
The theatre volume contains selected reviews that are as eloquent as they are famously provocative-reviews that can enrage but always entertain. Simon covers a wide range of New York productions, from the East Village to Broadway, examining all with the same rigor and high expectations.
A SAMPLE: Simon on Vanessa Redgrave in Long Day's Journey into Night: “The highly accomplished Redgrave gets some details right, but the overarching mental unstableness she exudes is so excessive as to make one wonder whether she is playing or being unhinged.”

John Simon was born in Yugoslavia in 1925 and received his B.A. in English, as, well as his M.A. and Ph.D. in Comparative Literature, from Harvard University., He has written theatre, film, music, and book reviews for publications such as New York, Esquire, the Hudson Review, National Review, Opera News, the New Leader, Commonweal, the New Criterion, and the New York Times Book Review. Simon has won the George Jean Nathan Award and the George Polk Award for Film Criticism. He lives in New York City.

Theater buffs curious about what one of the country's most esteemed critics thinks of their favorite plays may want to pick up this collection of reviews and criticism, but they might be disappointed when he doesn't agree with them. In this volume, released simultaneously with John Simon on Film and John Simon on Music, Simon takes turns skewering and lauding almost anything that opened on Broadway or Off in the past 30 years. Known for his acid wit (in his introduction, O'Brien refers to him as "cranky, but never a snob"), some of Simon's turns of phrase can certainly seem harsh (he refers to Billy Joel's music for Movin' Out as "street noise" and says that the show is appropriate only for "foreign visitors who speak no English") but he never apologizes for his opinions. Simon's writing is accessible, and it's often surprising to see which productions he likes and which he detests. And while certain shows beloved by other critics and the theater-going public are slashed to bits, the book is a necessary compilation of an important cultural critic's work that certainly deserves to be on the shelves of theater scholars and historians, as well as those wishing to study a master of arts criticism.
Copyright © Reed Business Information, a division of Reed Elsevier Inc. All rights reserved.