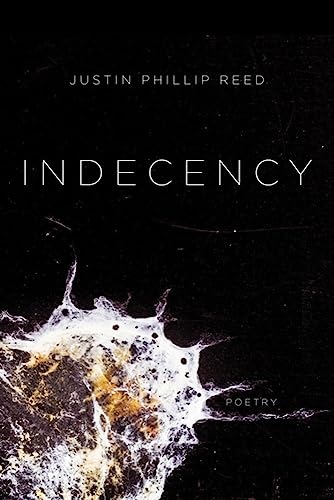 Winner of the 2018 National Book Award in Poetry

Indecency is boldly and carefully executed and perfectly ragged. In these poems, Justin Phillip Reed experiments with language to explore inequity and injustice and to critique and lament the culture of white supremacy and the dominant social order. Political and personal, tender, daring, and insightful―the author unpacks his intimacies, weaponizing poetry to take on masculinity, sexuality, exploitation, and the prison industrial complex and unmask all the failures of the structures into which society sorts us.

Justin Phillip Reed was born and raised in South Carolina. His work appears in African American Review, Best American Essays, Callaloo, the Kenyon Review, Obsidian, and elsewhere. He received an MFA in poetry from Washington University in St. Louis. The author of the chapbook A History of Flamboyance (YesYes Books, 2016), he has received fellowships from the Cave Canem Foundation and the Conversation Literary Festival. He lives in St. Louis.

“Reed’s visceral and teasingly cerebral debut probes black identity, sexuality, and violence and is inseparably personal and political. He displays a searing sense of injustice about dehumanizing systems, and his speakers evoke the quotidian with formidable eloquence . . .” —Publishers Weekly, starred review

“[Reed’s] poems take up the body in desire and violence, and they do so by thrusting the reader into a stark visceral encounter with their material.” —The New York Times

“Indecency made me stand up and applaud.” —The Millions

“Reed’s poems are formally inventive, especially when he works in concrete ways on the page. . . . The reader winds up in a new place without realizing they were being moved there.” —The Rumpus

“Reed’s wit and formal experimentation, quicksilver and luminous, shows the world as it is, while detailing how the very people that society most devalues, demeans, and seeks to destroy are its true visionaries.” —The Adroit Journal

“Reed wrestles with finding the language to convey the pain of that double oppression and still manages to create terrible beauty.” —Signature

“Reed’s love of language is ever-present in his joyful play with words throughout his poetry.” —The Root

“An unflinching exploration of power, race, sexuality, gender, the personal and the political.” —Vox

“Political and personal, tender, daring, and insightful―the author unpacks his intimacies, weaponizing poetry to take on masculinity, sexuality, exploitation, and the prison industrial complex and unmask all the failures of the structures into which society sorts us.” —The Rumpus

“As we grapple with issues of equity and inclusion, insights that Reed invokes are essential. They expose a treacherous legacy, an inheritance we all must own.” —The Manitou Messenger

“Within the containment of mostly invented forms, Justin Phillip Reed’s Indecency is the ‘carnal weight’ I’ve longed for in poetry. It’s the guttural dream of utterance that strokes and pokes the body. Reed’s deft craft is so rare, so precise, and driven by language whose surface is texture like teeth, that it seems like freed speech into the ache of repressive histories, white gazes, and uninvited invasions. Violence in Reed’s hands is no longer a thing somewhere out there but is inside the heart, as close as any black desire. Indecency is the new duende. It is like no other book I’ve read; Reed is an extraordinary talent.” —Dawn Lundy Martin

“In this gorgeous first collection, there is no separation of sound from the language it travels in, from the body that produces it, from the experience that evokes it. Justin Phillip Reed achieves an impressive unity of form and content, never obscuring meaning in its varied violences inside the poems’ luxuriant unfolding—the ‘absent-present’ rich with tough phantoms and the fragile living, and underneath: an unwillingness to buckle under unwanted and unasked-for burdens. In conversation with Frank O’Hara and Dawn Lundy Martin, with Michael Brown and Ezell Ford, with Ralph Ellison and Harryette Mullen, with the named and unnamed populace who understand sufferance but also resilience, pain but also sweetness, Indecency is a refusal of pretense, a celebration of possibilities within human complexity—and the hard-earned freedom inextricable from the public and private histories from which it is wrought.” —Khadijah Queen

“Don’t avert: Justin Phillip Reed demands we witness that who’s missing was taken, who fell was dropped, and who died was murdered. Witness, too, that who done it will claim everything but responsibility. That obscenity drives the poet to fracture language into the exquisite shrapnel of lyric paroxysms, leaves a ‘body / . . . deboned of its irony.’ That indecency triggered these devastating poems. Fuck what they claim; here’s what Reed has seen.” —Douglas Kearney

“It would be a mistake, in heeding Reed's outrage and his sense of urgency (and heed it we should) to hurry past the beauty in these poems, of which there is plenty to be found: potent word play, intricate rhyme, and stray lines like ‘a smeared sweet on his cheek in the parenthesis of a grin’ or ‘the dense streets clapped into a quick-descended stillness.’” —Assignment

“More than their beauty, what the poems of A History of Flamboyance flaunt is their insistence, a restless and, finally, necessary intellectual rigor that demands as much from the reader as it will delight and trouble her. But don’t be tricked in thinking these are consequently too-stiffened poems, lacking blood. There’s blood moving in every line of Reed’s poems, and there’s nerve, which is only to say that here is also honest if sometimes painful feeling, vulnerability articulated with power. If these poems are confessions, then Reed’s many formal interventions mean to break up, down or apart, reveal and revise, perhaps, the performance of those confessions, an effort to expose their inner makings, motives, our histories, these ‘constructed rituals’ of shame and desire. I’d say this fits a mind that seems at turns insatiable, wanting more of our world and of the poem; at other times more reserved, wanting less; but at all times is a mind nevertheless committed to the poem’s queerest possibility, evoking its many traditions just as it disrupts or rewrites them. So these poems teach me. Justin Phillip Reed is a productive new voice in contemporary poetry, ‘rose up like a hard new fact,’ and one that feels in every way as irrefutable.” —Rickey Laurentiis

“To be re-born inside these poems of chasm is a rigor not quietly undertaken. Justin Phillip Reed undoes the sonnet’s deep organization with the violent abandon of a boy become object in the stink of rapture. A ripping of form occurs. A cataclysm of self. And what do we find in these body ruins? I, for one, hear the hunt of masculine desire beating through—familiar, a known place—calling like a rustling of trees in night’s black thought. These poems at once trouble this bringing forth and grieve the ‘softness’ become ‘satchel.’ Indeed, how do we ever re-gather ourselves? When I read these poems by Reed, I’m left energized, bereft, and altered. They will forever live in my imagination.” —Dawn Lundy Martin

Book Description Paperback. Condition: New. Language: English. Brand new Book. Winner of the 2018 US National Book Award for PoetryIntricate, intimate, difficult, and confrontational poems that push at the boundaries of selfhood, skin, culture, sexuality, and blood. Indecency is boldly and carefully executed and perfectly ragged. In these poems, Justin Phillip Reed experiments with language to explore inequity and injustice and to critique and lament the culture of white supremacy and the dominant social order. Political and personal, tender, daring, and insightful-the author unpacks his intimacies, weaponizing poetry to take on masculinity, sexuality, exploitation, and the prison industrial complex and unmask all the failures of the structures into which society sorts us. Seller Inventory # AAC9781566895149