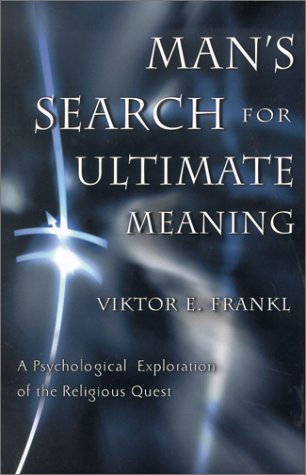 Man's Search for Ultimate Meaning focuses on Dr. Frankl's crucial findings that illustrate our sometimes unconscious desire to get hold of an ultimate meaning of life - whether it comes from a religious source or other venue of inspiration or influence. This is a very relevant topic, especially in light of that pervasive feeling of meaninglessness undercutting the ideas and ambitions of contemporary society. Whether it is the adolescent suffering from insecurity and doubt or the elderly person fearing isolation and neglect, a desperate sense of hopelessness and vulnerability plagues our culture. Dr. Frankl brilliantly demonstrates that it is possible for mankind to find, and actualize, profound meaning in his or her daily life. In this context, Frankl speaks of a "will to meaning" as a central motivating force, and presents specific evidence that life can offer meaning in each and every situation. For even those who have to shoulder the burden of personal guilt, or to face the force of inescapable suffering, still have, in principle, a unique opportunity to turn a predicament into an achievement - in other words, to turn personal tragedy into human triumph. Man's Search for Ultimate Meaning confesses that this search for meaning can also lead to nefarious ends such as unhealthy nationalism, obsessive jealousies, ethnic hatred, or a compulsive work ethic. Dr. Frankl believes that tolerance and a realization of our infinite possibilities throughout our finite existence will ensure a path to a fulfilling existence.

Review:
Viktor Frankl, author of the smash bestseller Man's Search for Meaning, offers a more straightforward alternative to traditional Freudian psychoanalysis: one's problems may be rooted in a failure to find a meaning in life beyond one's interior world. The basis for his interpretation, however, is not so straightforward. It lies in Frankl's existential analysis, plumbing for the reasons that people have repressed their consciences, their love, their creativity. By legitimizing a spiritual aspect of the human mind, Frankl has separated us definitively from the animal kingdom, but it is still up to each of us to rise to our human potential.
About the Author:
Viktor E. Frankl (1905-1997) developed the revolutionary approach to psychotherapy known as logotherapy, founded on the belief that humanity's primary motivational force is the search for meaning. One of the great psychotherapists of this century, he was head of the neurological department of the Vienna Polyclinic Hospital for twenty-five years and is the author of thirty-one works on philosophy, psychotherapy, and neurology, including the classic Man's Search for Meaning, which has sold over nine million copies around the world.