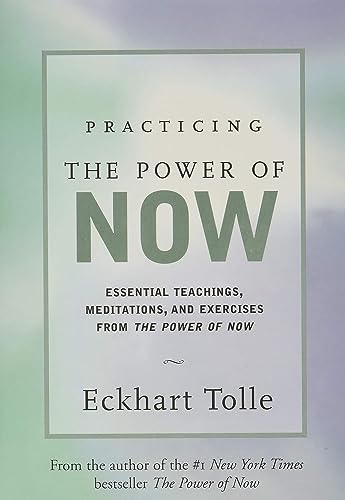 Eckhart Tolle: Eckhart Tolle, a spiritual teacher and author who was born in Germany and educated at the Universities of London and Cambridge, is rapidly emerging as one of the world’s most inspiring spiritual teachers. His views go beyond any particular religion, doctrine, or guru. In The Power of Now and his subsequent book Practicing the Power of Now, Eckhart shares the enlightenment he himself experienced after a profound inner transformation radically changed the course of his life.

Your path to enlightenment: Practicing the Power of Now extracts the essence from Eckhart’s teachings in his New York Times bestseller, The Power of Now (translated into 33 languages). Practicing the Power of Now shows us how to free ourselves from “enslavement to the mind.” The aim is to be able to enter into and sustain an awakened state of consciousness throughout everyday life. Through meditations and simple techniques, Eckhart shows us how to quiet our thoughts, see the world in the present moment, and find a path to “a life of grace, ease, and lightness.”

The next step in human evolution: Eckhart’s profound yet simple teachings have already helped countless people throughout the world find inner peace and greater fulfillment in their lives. At the core of the teachings lies the transformation of consciousness, a spiritual awakening that he sees as the next step in human evolution. An essential aspect of this awakening involves transcending our ego-based state of consciousness. This is a prerequisite not only for personal happiness but also for the ending of violence on our planet.

Readers of other transformational self-help books such as The Four Agreements, The Miracle Morning, Braving the Wilderness, and The Book of Joy will want to read Practicing the Power of Now.

This manual-style book instantly dives into Eckhart Tolle's principles of "living in the moment," which could be a jarring experience for readers who haven't read his preceding book, The Power of Now. For the initiated, though, this makes an excellent companion guide--rich in exercises and meditations to help readers get out of their minds so they can live more peacefully in their bodies. Sometimes it's hard to fathom what on earth Tolle is talking about: "To regain awareness of Being and to abide in that state of 'feeling-realization' is enlightenment." Be patient. All concepts will be revealed (or at least more carefully explained). Ultimately, Tolle leads readers into a new form of thinking (or actually not thinking) that erases the consuming habits of waiting, worrying, and being in fear. The first step is ending the "delusion of time." He asks, "Are you always trying to get somewhere other than where you are? ... Is most of your doing just a means to an end?" If so, Tolle has a book full of advice for you. As simplistic as this may sound, Tolle's work has spiritual merit and depth, especially for frantic Westerners who find their lives diminished by packed schedules and busy-ness. --Gail Hudson

ECKHART TOLLE is a contemporary spiritual teacher who is not aligned with any particular religion or tradition. He writes with the timeless and uncomplicated clarity of the ancient spiritual masters and imparts a simple yet profound message: There is a way out of suffering and into peace. He is the author of Stillness Speaks and Practicing the Power of Now. He travels widely and lives in Vancouver, British Columbia.

Practicing The Power Of Now

PRACTICING THE POWER OF NOW (cl)

Practicing the Power of Now: Meditations, Exercises, and Core Teachings for Living the Liberated Life (Hardback or Cased Book)