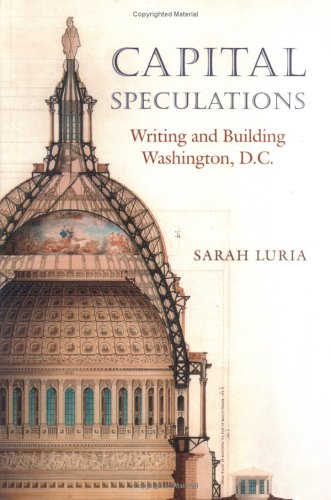 In this lively study, Sarah Luria pursues the vital political connection between architecture and literature in the formation in 1791 of America's grand new capital city. City planners believed that designing Washington, D.C. as a physical model of the Constitution and its balance of powers would help citizens bond with the newly created nation. Although wildly ambitious, this design was made feasible through financial speculation. Dazzled by the plans for an "American Rome," citizens would buy up its empty lots and make the nation's capital their home. Luria demonstrates how political and financial speculation combined to build Washington and, once established, how the capital became a stage for the visions of subsequent reformers.

Luria examines five political reformers and the Washington sites they used to promote their ideas: George Washington and the design of the "Federal City"; Abraham Lincoln and the enlargement of the Capitol dome during the Civil War; Walt Whitman and the capital's Civil War hospitals; Frederick Douglass and his impressive estate overlooking the Capitol; and Henry Adams and the double house that he built with poet-statesman John Hay on Lafayette Square. Although each author's work describes a different dynamic relationship between text and physical space, all five combine political speculation and marketplace psychology. They construct their visions and attract investment in them through their novelty, boldness, and extravagant scale.

SARAH LURIA is Assistant Professor of English at College of the Holy Cross in Worcester, Massachusetts.

Book Description Univ of New Hampshire, Durham, New Hampshire, U.S.A., 2005. Soft cover. Condition: New. UPNE (illustrator). NEW Book, perfect condition, cover/text completely pristine. No physical flaws. FREE TRACKING within the US, and email notice when shipped. Normally, books are shipped twice a day, with afternoon USPS pickup, or next morning drop-off at the Post Office. We package on Sunday for shipment first thing Monday morning. Your satisfaction guaranteed. We have multiple copies of most books. Email inquiries are welcomed. Thanks for reading all of our boilerplate. Seller Inventory # 008501