Items related to The Picture of Dorian Gray 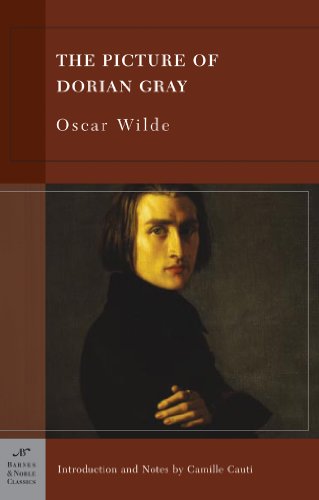 The Picture of Dorian Gray, by Oscar Wilde, is part of the Barnes & Noble Classics series, which offers quality editions at affordable prices to the student and the general reader, including new scholarship, thoughtful design, and pages of carefully crafted extras. Here are some of the remarkable features of Barnes & Noble Classics:

All editions are beautifully designed and are printed to superior specifications; some include illustrations of historical interest. Barnes & Noble Classics pulls together a constellation of influences—biographical, historical, and literary—to enrich each reader's understanding of these enduring works.

Oscar Wilde brings his enormous gifts for astute social observation and sparkling prose to The Picture of Dorian Gray, his dreamlike story of a young man who sells his soul for eternal youth and beauty. This dandy, who remains forever unchanged—petulant, hedonistic, vain, and amoral—while a painting of him ages and grows increasingly hideous with the years, has been horrifying, enchanting, obsessing, even corrupting readers for more than a hundred years.

Taking the reader in and out of London drawing rooms, to the heights of aestheticism, and to the depths of decadence, The Picture of Dorian Gray is not only a melodrama about moral corruption. Laced with bon mots and vivid depictions of upper-class refinement, it is also a fascinating look at the milieu of Wilde’s fin-de-sičcle world and a manifesto of the creed “Art for Art’s Sake.”

The ever-quotable Wilde, who once delighted London with his scintillating plays, scandalized readers with this, his only novel. Upon publication, Dorian was condemned as dangerous, poisonous, stupid, vulgar, and immoral, and Wilde as a “driveling pedant.” The novel, in fact, was used against Wilde at his much-publicized trials for “gross indecency,” which led to his imprisonment and exile on the European continent. Even so, The Picture of Dorian Gray firmly established Wilde as one of the great voices of the Aesthetic movement, and endures as a classic that is as timeless as its hero.

A lush, cautionary tale of a life of vileness and deception or a loving portrait of the aesthetic impulse run rampant? Why not both? After Basil Hallward paints a beautiful, young man's portrait, his subject's frivolous wish that the picture change and he remain the same comes true. Dorian Gray's picture grows aged and corrupt while he continues to appear fresh and innocent. After he kills a young woman, "as surely as if I had cut her little throat with a knife," Dorian Gray is surprised to find no difference in his vision or surroundings. "The roses are not less lovely for all that. The birds sing just as happily in my garden."

As Hallward tries to make sense of his creation, his epigram-happy friend Lord Henry Wotton encourages Dorian in his sensual quest with any number of Wildean paradoxes, including the delightful "When we are happy we are always good, but when we are good we are not always happy." But despite its many languorous pleasures, The Picture of Dorian Gray is an imperfect work. Compared to the two (voyeuristic) older men, Dorian is a bore, and his search for ever new sensations far less fun than the novel's drawing-room discussions. Even more oddly, the moral message of the novel contradicts many of Wilde's supposed aims, not least "no artist has ethical sympathies. An ethical sympathy in an artist is an unpardonable mannerism of style." Nonetheless, the glamour boy gets his just deserts. And Wilde, defending Dorian Gray, had it both ways: "All excess, as well as all renunciation, brings its own punishment."

Oscar Wilde's only published full length novel, is the story of a man who sells his soul for eternal youth. In exchange, what does he give up and what does he gain? This novel, by Wilde is a wonderful soul-searching example of the cost of paradise, and the price of a wish.

Read by actor, comedian, novelist, journalist, screenwriter Stephen Fry, Dorian Gray's dilemma comes alive. He has also acted in a variety of films including A Fish Called Wanda, Peter's Friends, and The Wind in the Willows.

THE PICTURE OF DORIAN GRAY