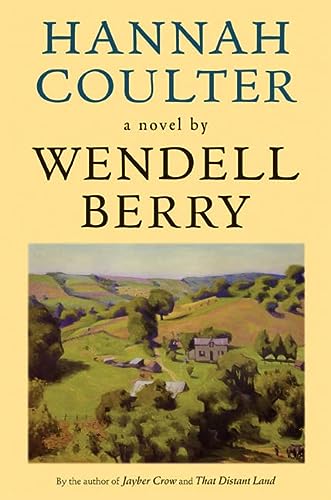 Hannah Coulter is Wendell Berry’s seventh novel and his first to employ the voice of a woman character in its telling. Hannah, the now-elderly narrator, recounts the love she has for the land and for her community. She remembers each of her two husbands, and all places and community connections threatened by twentieth-century technologies. At risk is the whole culture of family farming, hope redeemed when her wayward and once lost grandson, Virgil, returns to his rural home place to work the farm.

Wendell Berry has published 40 volumes of fiction, poetry and essays, a prodigious output for any writer, all the more impressive given his concurrent careers as professor and farmer. Since 1960 his fiction has been exploring the good souls of Port William, Ky. In these novels and stories, a reader hears the echoes of Berry's moral essays, which insist on the commitment to land and community, and of his poetry, which insists on forthright, graceful language. Acutely aware of the connection between writer and reader, Berry addresses us in the soft Kentucky cadences of his characters.

In Hannah Coulter, the latest Port William novel, a woman simply tells the story of her long life. The form of this tale resembles not so much what we expect of a traditional novel -- the accumulation of scenes into a dramatic arc -- as it does a testament, a life sketched in broad outline, then reflected upon by the teller. This stripped-down approach, as old-fashioned as the gospels that Hannah lives by, is compelling. Though her voice is neither insistent nor even particularly forceful, it embodies its author's lyrical graciousness, and a reader settles in for long, comfortable stretches.

Hannah's Depression-era girlhood is marked by poverty, the sudden loss of her mother and the arrival of a jealous stepmother, but she does not define herself by her troubles. With the support of her loving and cagey grandmam, she makes her way into the world. Though her adult identity will come through marriage and motherhood, Hannah Coulter remains the shaper of her own destiny. In her grandmam's day, she says, women dressed in long skirts for the most physical work and "must have been like well-wrapped gifts, to be opened by their husbands on their wedding night, a complete surprise." Acutely aware of the male gaze, she nonetheless resists regarding herself as an object craved by men: She is smart, competent and watchful, and she finds solace in the company of other women. "All women is brothers," a male relative says, and she wryly agrees.

She marries, in turn, two characters who have themselves been the subjects of earlier Berry novels: Virgil Feltner, declared missing in the Battle of the Bulge, and Nathan Coulter, who survives the Battle of Okinawa and later marries his own grief to Hannah's. World War II is at the center of all the Port William novels -- for Berry, it is the central event of 20th-century American life -- but Hannah and Nathan do not dwell on it. After a healing time, they raise Hannah's daughter and two sons of their own and cultivate their farm, their lives crowded with work and the companionship of family and neighbors. They call their communal workforce "our membership," an economic necessity that also sustains them spiritually.

Berry's vision of stewardship of the land is at once deeply conservative (in his essays he invokes the best impulses of the old Agrarian movement) and bold in its visionary ideas. The Coulters' life is not idyllic -- Berry is too honest about the labor involved and the poverty endured -- but his evocation of the pleasures of sweat and toil is convincing. The Coulters raise their children to work alongside them and plan to pass the farm on to them, but their offspring drift off, as modern children do, to urban and technological and academic lives. Hannah accepts this as she does the other disappointments of her life, as things beyond her control.

For long stretches, a reader is apt to forget that a male imagination is shaping Hannah's narration, but every now and again a detail seems not so much false as absent: Men's desire for Hannah is insisted upon ("A man's desire is the most flattering mirror a woman ever stands before"), but we get little sense of her own desire. At novel's end, she will graphically envision Nathan's wartime horror, but her own struggles with the muck of childbirth and death are elided. Never mind. It is always something of a miracle when a fiction writer makes the "leap," as Eudora Welty called it, and inhabits the skin of the other sex.

Near the end, Hannah's relentlessly positive spirit in the face of Nathan's painful death is so unflagging that it approaches falsity. But Berry anticipates a reader's doubts and takes the novel down a dark path. Hannah decides to learn what she can about her husband's past by learning what she can about the Battle of Okinawa. The pages describing her discoveries are the most explicitly religious, insistent and powerful of the book, an effect they achieve precisely because this darkness has been heretofore suppressed. Hannah identifies not only with her husband but with the people of Okinawa: "Want of imagination," she says, "makes things real enough to be destroyed." In this recognition, her voice becomes prophetic, and her empathy lifts her story beyond any lament for the dead and into a challenge for the living.

*Starred Review* For the first 40 pages or so, Berry's latest novel about the Kentucky farming community called, by its inhabitants as well as the author, the Port William membership, seems more of same. A good same, for few write American English more limpidly than Berry, and he has realized his characters as thoroughly as Faulkner did any of the people of Yoknapatawpha County. But as this telling of a farm woman's life in her voice continues--and voice it seems more than writing, so spontaneously speechlike are its cadences and the simple accuracy of its diction--it feels ever more poetic. Not gnomic and surrealist, like prose poetry, but flowing and long breathed, like epic poetry. Of course, the story it tells is epical, that of a heroine who expresses, in her living and doing, the essence of her people. Its character is domestic rather than martial; though, since its time span includes World War II, its trials include the MIA disappearance of Hannah's first husband and the ghastly combat experience of her second, Nathan Coulter, which Hannah learns of with any precision only after his death a half-century later. If its domesticity is more often happy and fulfilling, though, the cultural movement--the short, precipitate, ill-informed, poorly considered demise of the American family farm--over which Hannah's beautiful and heartbreaking story arches is as tragic as any war. Ray Olson
Copyright © American Library Association. All rights reserved

Book Description Paperback. Condition: New. Reprint. Language: English. Brand new Book. Hannah Coulter is Wendell Berry's seventh novel and his first to employ the voice of a woman character in its telling. Hannah, the now-elderly narrator, recounts the love she has for the land and for her community. She remembers each of her two husbands, and all places and community connections threatened by twentieth-century technologies. At risk is the whole culture of family farming, hope redeemed when her wayward and once lost grandson, Virgil, returns to his rural home place to work the farm. Seller Inventory # AAT9781593760786

Book Description Paperback. Condition: New. Reprint. Language: English. Brand new Book. Hannah Coulter is Wendell Berry's seventh novel and his first to employ the voice of a woman character in its telling. Hannah, the now-elderly narrator, recounts the love she has for the land and for her community. She remembers each of her two husbands, and all places and community connections threatened by twentieth-century technologies. At risk is the whole culture of family farming, hope redeemed when her wayward and once lost grandson, Virgil, returns to his rural home place to work the farm. Seller Inventory # BZE9781593760786